Firstly two quarter wavelengths OC stubs were tuned to 14.2MHz by iterative cut and measure. The coax was 20mm longer than prediction, I am not convinced that the transmission line models in Simsmith are better than that. Then the tees were made up and the connecting section and tuned by cut and measure for minimum |s11| at 7.1MHz. 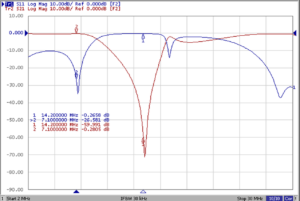 Above is the VNA sweep for the completed filter. Rejection around 14.2MHz exceeds 50dB with bandwidth of over 0.6MHz. 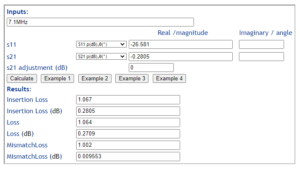 Above is calculation of the loss at the marker frequency at 7.1MHz. 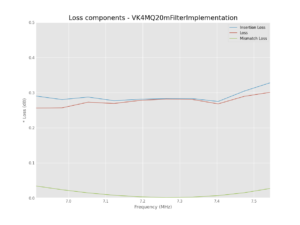 Above is a plot of the loss components on an expanded scale to see those around 7MHz. The is very little Mismatch Loss in the 7MHz band. 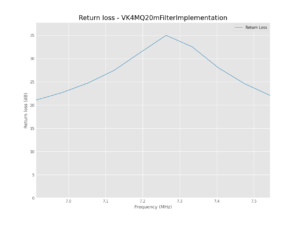 Above is the Return Loss plot around 7MHZ, the match is better than most practical antennas will be, and Return Loss with an ideal load is greater than 20dB.

A reminder that the models and calculations in the reference article assume that linear circuit theory applies, that the source is well represented by a Thevenin equivalent circuit with Zth=50+j0Ω. Most ham transmitters are not well represented by such a circuit, and the calculated results may not apply exactly.

The results given here were measured with a VNA and do reconcile well with calculation.

I would not rely upon the coax lengths calculated in Simsmith to cut the coax, I would cut them a little longer and ‘tune’ to required electrical length using a VNA (as Bruce did) or a good antenna analyser. With knowledge and experience, the filter could be adjusted using a good VSWR meter, a noise bridge, or a Return Loss Bridge for example, a good antenna analyser (meaning a one port VNA) or a VNA is a higher productivity tool.

The design concept of the two stub filter for a 7.1MHz pass and 14.2MHz reject is sound, the built filter has high rejection at 14.2MHz and very low Insertion VSWR at 7.1MHz

The only feedback from Bruce was that the cut lengths were very slightly longer than I predicted using Simsmith. Even so, the Return Loss plot reveals that the filter is tuned very slightly high on 7MHz.

The filter is designed to match a 50+j0Ω load, and it does that very well. When used on practical antennas that depart from that, the filter Return Loss and input VSWR will also depart.

The measurements reported were for RG214, results depend on line loss and may be quite poorer for lossier line.

The filter was used on a field day to facilitate concurrent operation on 40m and 20m, and it worked fine. Listening on the exact second harmonic showed moderate signal level, but tuning away from it a little was fine with no sign of blocking or desensitisation.