A quotation from Lord Kelvin is most appropriate: When you can measure what you are speaking about, and express it in numbers, you know something about it. But when you cannot measure it, when you cannot express it in numbers, your knowledge is of a meagre and unsatisfactory kind. It may be the beginning of knowledge but you have scarcely in your thoughts advanced to the state of science. END_OF_DOCUMENT_TOKEN_TO_BE_REPLACED

The message “ashim at shell servo” must be an important one.

I have heard VK2UBQ-9 sending this message to VK2XSO-5 for many months, a couple of hundred times a day when VK2UBQ-9 has his radio switched on.

The intended recipient was last reported on aprs.fi in May 2014, seven months ago, yet the APRS system is still wasting bandwidth trying to deliver this message, presumably waiting for a delivery acknowledgement. END_OF_DOCUMENT_TOKEN_TO_BE_REPLACED

I mentioned in Solder cream has a use-by date that a current project is another QRP2000 synthesiser. 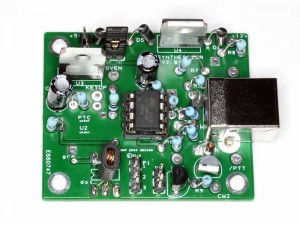 Above, the topside of the synthesiser board. The optional output transformer can be seen at lower left. END_OF_DOCUMENT_TOKEN_TO_BE_REPLACED

A current project is another QRP2000 synthesiser.

It has about 15 surface mount parts on the board underside, and it was tempting to use solder paste / cream and hot air to solder the parts on… less risk of flicking them on the floor and the self align due to surface tension in the molten solder. END_OF_DOCUMENT_TOKEN_TO_BE_REPLACED

My recent article Near-field field strength measurements using the RFPM1 described a technique using VK3AQZ’s RF Power Meter which is based on the AD8307 log detector.

There are many ways to measure low level RF power or voltage, and this article describes methods that I have used using a simple diode detector attached to the HF loop, and measuring the DC output voltage using a small digital panel meter with 9V battery for a self contained measurement system with little risk of significant common mode current. Such a system can be hauled to some height and read remotely with a telescope.
END_OF_DOCUMENT_TOKEN_TO_BE_REPLACED

This article is a review of the discussion at 7MHz.

The STL is a 1m diameter circular loop of 22mm diameter copper conductor at 1,5m height over ground with parameters δ=0.005 and ε=10.

Performance is assessed by prediction and measurement of near-field strength. 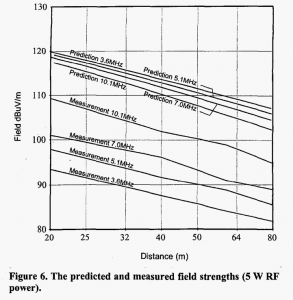 Above, Figure 6 from (Boswell et al 2005) shows their predictions and measurements of field strength in the near-field at a range of distances at ground level. END_OF_DOCUMENT_TOKEN_TO_BE_REPLACED

This series explores the effect of antenna height. (Note the models have not been calibrated to Paul’s scenario, they are stand alone models of a somewhat similar scenario for the purpose of studying the effect of height.) END_OF_DOCUMENT_TOKEN_TO_BE_REPLACED

But, does that mean that ham folk-lore that it necessarily degrades antenna VSWR bandwidth is soundly based? END_OF_DOCUMENT_TOKEN_TO_BE_REPLACED 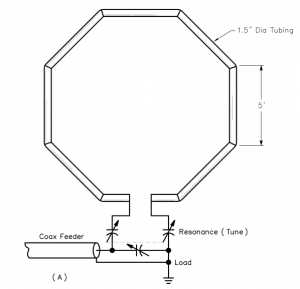 Above is a diagram from a much earlier ARRL and as far as I can ascertain, this is McCoy’s version the so-called ARMY Loop. (McCoy 1968) gives the middle capacitor as 500pF variable which would reduce the matching range. END_OF_DOCUMENT_TOKEN_TO_BE_REPLACED