(Purdum 2020) describes a small transmitting loop (STL) which is a little novel in that it uses an arrangement of four circular conductor loops, two in parallel in series with the other two in parallel.

The article goes on to claim some pretty extraordinary efficiency calculated from radiation resistance for a loop structure that is shown at a height of perhaps 2m above natural ground. END_OF_DOCUMENT_TOKEN_TO_BE_REPLACED

END_OF_DOCUMENT_TOKEN_TO_BE_REPLACED

Further to MFJ-1786 loop antenna – measurements and NEC-4.2 model at 10.1MHz, the question arises as to what commonly used tools readily permit the transformations and analysis. 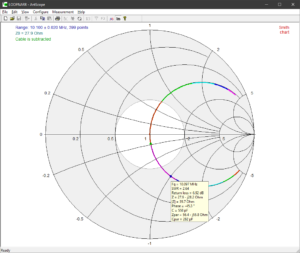 Finding the points where ReturnLoss is approximately 6.99dB with the cursor on the above diagram is quite easy. END_OF_DOCUMENT_TOKEN_TO_BE_REPLACED 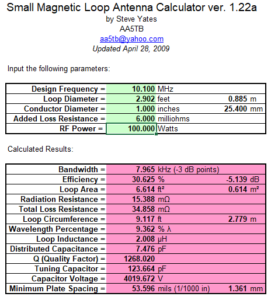 Above is a screenshot of AA5TB’s calculator with the real antenna dimensions and “Added Loss Resistance” to calibrate the model to the measured 8kHz half power bandwidth. It predicts an efficiency of 30.6%, 2.9 times that of the NEC model. Perhaps it is popular because it provides overly generous estimates, IMHO it lacks credibility for many reasons. END_OF_DOCUMENT_TOKEN_TO_BE_REPLACED 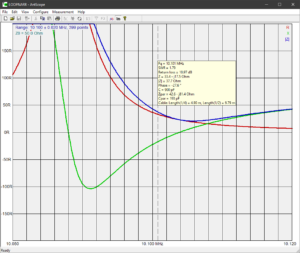 Above, the impedance plot. The cursor is at point of minimum VSWR, and the associated R and X values at the measurement point are not very useful. END_OF_DOCUMENT_TOKEN_TO_BE_REPLACED 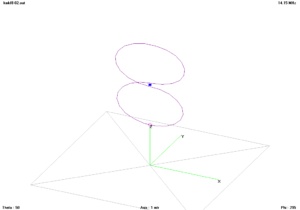 The graphic shows the geometry. In this case the source is at the bottom of the lower loop, and the blue square is the tuning capacitor. The loop conductor is 22mm copper tube, the loop diameters are 1m, and the capacitor connection is 100mm wide. Commonly these are fed by a low loss auxiliary loop at the bottom of the lower loop, but the direct feed is quite fine for modelling the loop performance. END_OF_DOCUMENT_TOKEN_TO_BE_REPLACED

Above is the VSWR scan of the calibrated model, the load is matched at centre frequency and half power bandwidth is taken as the range between ReturnLoss=6.99dB points. END_OF_DOCUMENT_TOKEN_TO_BE_REPLACED 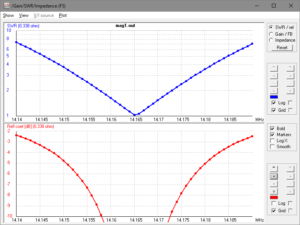 Above is the VSWR scan of the calibrated model, the load is matched at centre frequency and half power bandwidth is taken as the range between ReturnLoss=6.99dB points. END_OF_DOCUMENT_TOKEN_TO_BE_REPLACED 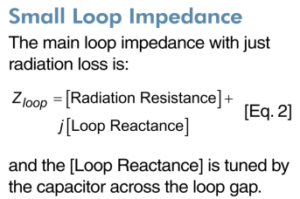 Above is a NEC simulation of such a loop. END_OF_DOCUMENT_TOKEN_TO_BE_REPLACED

Within the limits of measurement error, we can say that R at resonance should be very close to 51Ω, and VSWRmin close to 1.02. END_OF_DOCUMENT_TOKEN_TO_BE_REPLACED