Therefore, the LNA noise figure can be derived by measuring the noise with the LNA input terminated with a resistor equal to its input impedance. Then with the measurement repeated with the resistor removed, so that the LNA input is terminated by its own Dynamic Impedance. The difference in the noise ref. the above measurements will give a figure in dB which is equal to the noise reduction of the LNA verses thermal noise at 290K. Converting the dB difference into an attenuation power ratio then multiplying this by 290K gives the LNA Noise Temperature. Then using the Noise Temperature to dB conversion table yields the LNA Noise Figure. See Table 1.

The explanation is not very clear to me, and there is no mathematical proof of the technique offered… so a bit unsatisfying… but it is oft cited in ham online discussions.

I have taken the liberty to extend Ikin’s Table 1 to include some more values of column 1 for comparison with a more conventional Y factor test of a receiver’s noise figure.

Above is the extended table. The formulas in all cells of a column are the same, the highlighted row is for later reference. END_OF_DOCUMENT_TOKEN_TO_BE_REPLACED

Let’s review of the concepts of noise figure, equivalent noise temperature and measurement.

Firstly let’s consider the nature of noise. The noise we are discussing is dominated by thermal noise, the noise due to random thermal agitation of charge carriers in conductors. Johnson noise (as it is known) has a uniform spectral power density, ie a uniform power/bandwidth. The maximum thermal noise power density available from a resistor at temperature T is given by \(NPD=k_B T\) where Boltzman’s constant kB=1.38064852e-23 (and of course the load must be matched to obtain that maximum noise power density). Temperature is absolute temperature, it is measured in Kelvins and 0°C≅273K.

So for example, if we were to place a 50Ω resistor on the input of a nominally 50Ω input amplifier, and raised its temperature from 0K to the point T where the noise output power of the amplifier doubled, would could infer that the internal noise of the amplifier could be represented by an input resistor at temperature T. Fine in concept, but not very practical.

AN 57-1 contains a detailed mathematical explanation / proof of the Y factor method. 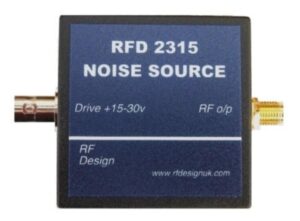 We can buy a noise source off the shelf, they come in a range of hot and cold temperatures. For example, one with specified Excess Noise Ratio (a common method of specifying them) has Th=9461K and Tc=290K. If we measured a DUT and observed that Y=3 (4.77dB) we could calculate that NF=12dB. END_OF_DOCUMENT_TOKEN_TO_BE_REPLACED

A new version of Antscope2 has been released.

Online posters are excited that it supports some versions of nanoVNA, and one thread attempts to answer the questions:

The SWR image shows that the SWR minimum is at the center phase angle as you would expect. My question is:

They are interesting questions which hint the ham obsession with resonance as an optimisation tartget.

In this case, the statistics being discussed are Phase and VSWR, and their relationship.

What is the Phase being discussed? 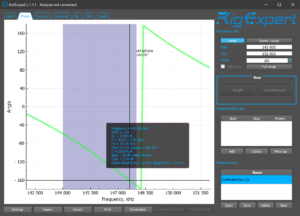 Above is an Antscope2 phase plot for an archived antenna measurement. The measurements are of a 146MHz quarter wave mobile antenna looking into about 4m of RG58C/U cable. We will come back to this. END_OF_DOCUMENT_TOKEN_TO_BE_REPLACED

A recent post by David Knight described dimensional issues with the N connector on his AA-600 and problems with the seller in having it resolved.

Warned of a potential quality issue, I measured my own AA-600. 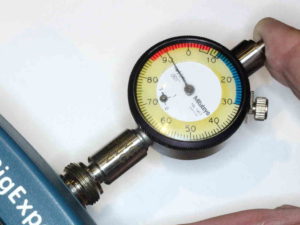 Above, the test of the inner pin forward surface distance from the reference plane on the N jack on the AA-600. The acceptable range on this gauge for the female connector is the red area, and it is comfortably within the red range. 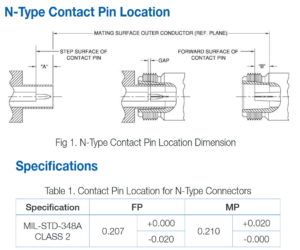 Above is a table of critical dimensions for ‘ordinary’ (ie not precision) N type connectors from Amphenol.

This dimension is important, as if the centre pin protrudes too much, it may damage the mating connector.

I used a purpose made gauge to check this, but it can be done with care with a digital caliper (or dial caliper or vernier caliper), that is what I did for decades before acquiring the dial gauge above.

Having seen some recent discussion where the online experts opined that an example given of a VSWR plot that contained a fairly consistent ripple was quite normal, this article suggests there is an obvious possible explanation and that to treat it as quite normal may be to ignore the information presented. 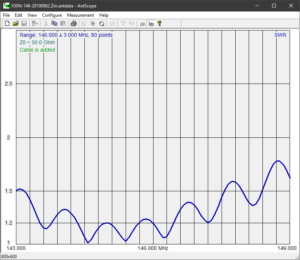 Above is a partial simulation of a scenario using Rigexpert’s Antscope. It starts with an actual measurement of a Diamond X-50N around 146MHz with the actual feed line de-embedded. Then a 100m lossless feed line of VF=0.66 is simulated to produce the plot that contains a ripple apparently superimposed on an expected V shaped VSWR curve.

This is the type of ripple that the expert’s opine is quite normal. END_OF_DOCUMENT_TOKEN_TO_BE_REPLACED

Opinion by some is that the modification I performed above which electrically bonds the two connectors through a brass bar of about 60mm length is likely to significantly degrade performance. END_OF_DOCUMENT_TOKEN_TO_BE_REPLACED 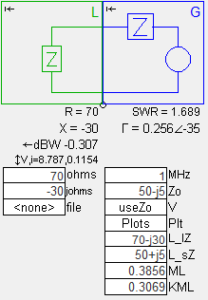 END_OF_DOCUMENT_TOKEN_TO_BE_REPLACED

The answer is on the face of it quite simple. END_OF_DOCUMENT_TOKEN_TO_BE_REPLACED

At first, the strength of the butt soldered joint might seem a simple case of beam analysis where the beam is of cast solder of the same cross section l x w as the soldered joint. END_OF_DOCUMENT_TOKEN_TO_BE_REPLACED

Common practice is to speak of a “source VSWR” to mean the VSWR calculated or measured looking towards the source, and very commonly this is taken wrt 50+j0Ω which may be neither the source or load impedance but an arbitrary reference. END_OF_DOCUMENT_TOKEN_TO_BE_REPLACED