Readers of my articles occasionally ask for explanation of the distinction between meanings of:

These terms apply to linear circuits, it circuits that comply with linear circuit theory, things like that impedances are independent of voltage and current, sources are well represented by Thevenin and Norton equivalent circuits.

Insertion Loss is the ratio of power into a matched load (to mean that the load impedance is the complex conjugate of the Thevenin equivalent source impedance) to the power in the load with the subject network / device inserted.

Insertion Loss can also be expressed in dB.

Mismatch Loss is the ratio of output power of a source into a matched load to the output power under a given mismatch.

Mismatch Loss can also be expressed in dB.

Loss can also be expressed in dB.

Loss is sometimes called Transmission Loss to distinguish it from other qualifications, but it is unnecessary. Recent hammy Sammy practice is to label |s21| graphs Transmission Loss which is an error on two counts.

Let’s illustrate these with some examples using Simsmith. Whilst these are models, you would expect to measure similar results using a good VNA or like test equipment. 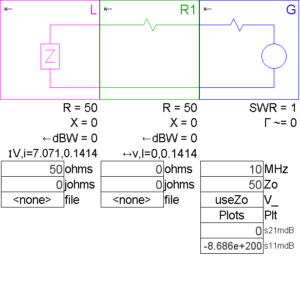 Above is a simple schematic, R1 has no effect, it is there for further development below. The load is matched to the source and all available power (0dBW) reaches the load. 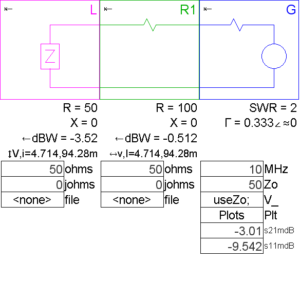 Above is a simple schematic. This time R1=100Ω, it causes input mismatch so power from the source is reduced to -0.512dBW. Further, only half of the power reaches load L, so power in the load is -3.52dBW. The reduction in power is due to a combination of input Mismatch Loss and Loss in R1. 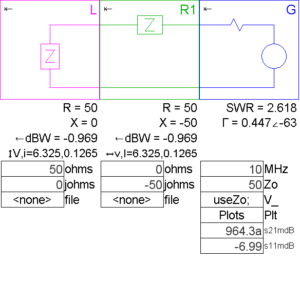 Above is a simple schematic. This time R1=-j50Ω, a lossless capacitive reactance which causes input mismatch so power from the source is reduced to -0.969dBW. But this time, all of that power reaches load L (Element R1 is lossless), so power in the load is -0.969dBW. The reduction in power is due entirely to input Mismatch Loss.

Let’s create a model of a 49:1 transformer for measurement using a VNA. It is a practical example that embodies the components of a common DUT. 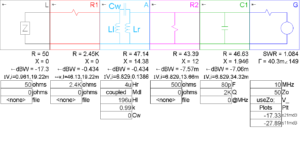 The source G will deliver 0dBW into a matched load.

Since the VNA Port 2 has an input impedance of 50 ohms, and the intended load impedance for the transformer is 49*50=2450Ω, we will insert a 2400Ω resistor in series with VNA Port 2, it is R1 in the schematic above.

Element A represents the transformer, the inductance values imply the turns ration and nominal impedance transformation ratio, and k is the flux coupling factor.

R2 is a simple model of core loss.

C1 is a capacitor to partially compensate the effects of leakage inductance implicit in transformer A.

Included on the schematic are calculated values for the magnitude of s11 and s21 @ 10MHz.

Studying the power flow, the power from the source G is -0.007dBW, so we can infer that input Mismatch Loss is 0.007dB.

The output power of the transformer is -0.434dBW, it is a result of input Mismatch Loss and losses within the network (mainly core loss in this instance).

Let’s calculate how much power is converted to heat. 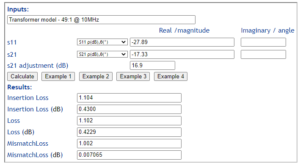 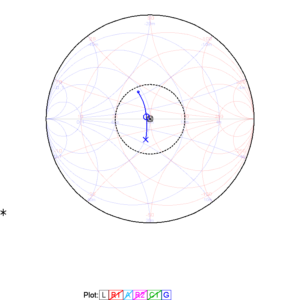 Above is the Smith chart plot of a sweep from 3-30MHz, VSWR circle 2 is shown. It is very nearly a perfect match at 10MHz (the small circle).

Most ham transmitters are not well characterised by an equivalent Thevenin circuit, and so the foregoing does not apply literally. Results might be quite similar, but the extent of the difference is dependent on the transmitter and is uncertain.

Difference scenarios may see some of these factors less important than others, or even unimportant.

A common mistake is to take a VNA, measure |s21| and calculate Insertion Loss, and to infer from that alone, the conversion of RF energy to heat. This can have gross error.

Understand the meaning of each, be clear about what is needed and what is being measured and how to get from the latter to the former.