An opportunity presented to measure the loss of a sample of JSC windowed ladder line. The line uses single core #18 CCS conductors and is equivalent to products sold under various proprietary names. JSC Wire & Cable is now known as Seminole Wire & Cable, and this is their 1318 product.

The copper cladding is probably around 70µm.

Measurements were made of impedance looking into a 20.1m section of line with both a s/c and o/c termination. Characteristic impedance, velocity factor and matched line loss (MLL) were calculated from the measured data from 1 to 2.5MHz. 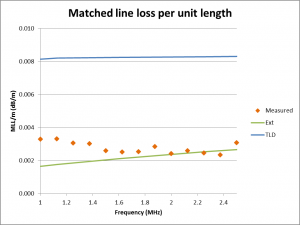 Above is a plot of MLL:

The extrapolation of N7WS measurements is potentially unsafe as it is a loss model based on measurements very remote from the frequency of interest, but it does indicate the loss that would be expected if the line conformed to the loss model which depends on the conductors having copper like behaviour.

In fact the conductors are copper clad steel, and they will have copper like behaviour at frequencies where the cladding is more than three skin depths in thickness (about 8MHz). Below this frequency, performance will degrade progressively.

At 1MHz, the cladding is barely greater thickness than one skin depth, so effective RF resistance will have increased significantly, and this probably accounts for most of the increased loss in measurements at the lower end of this chart.

TLDetails uses its own methods, and overestimates measured loss grossly.

The measurements confirm concerns that this transmission line departs significantly from copper like performance at lower frequencies, but the departure is small even on the 160m band. The good news is that it is quite fine on the HF bands, indeed that loss models and calculators (such as TLLC) based on N7WS’s measurements are probably sufficiently accurate on HF..

It should be expected that the more expensive 19 strand versions of these lines might exhibit a sinificant departure from copper behaviour at a higher frequency since the copper cladding is thinner (a fifth or less depending on the construction).