I attempted to decode APRS on 147.175MHz, most traffic being received from two fairly local digipeaters (VK2AMW and VK2RHR).

APRS on 147.175MHz uses land mobile radios which use narrow band FM with 6dB/octave pre-emphasis over the whole voice band. The physical layer is AFSK at 1200bps using Bell 202 modem standard, intended to be sent via the microphone input and received from the speaker output of these radios unmodified, ie with pre-emphasis and de-emphasis operative.

Layer 1 of AX.25 has been under specified for a long time, which probably contributes to the manifest lack of understanding.

The TNC is a VK6 Flash TNC which uses the AM7910 World Modem chip, a reasonably tolerant modem.

The Icom IC-2200H would never successfully decode the above digis (and there is negligible other direct traffic apart from occasional signals from the distant VK1RGI digi).

A Yaesu FT-2800M was tried and it was more successful, decoding most packets.

So, what is the reason for this.

The receivers were measured to evaluate the accuracy of the de-emphasis circuit. The test was performed with a FM signal of 3kHz deviation and modulating frequencies of 2kHz and 1kHz, and the audio output voltage for each was read and the de-emphasis calculated:

There is a measurable difference in the receivers.

The audio output of the receivers was captured on a DSO. 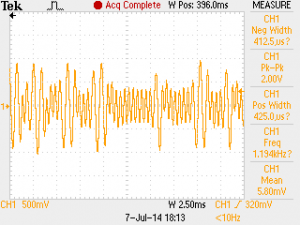 Above the output from the Icom, the high tone is 8.8dB lower than the low tone whereas they should be at the same level if the transmitter and receiver had properly matching pre-emphasis / de-emphasis. 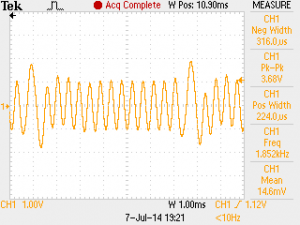 Above the output from the Yaesu, the high tone is 5.1dB lower than the low tone whereas they should be at the same level if the transmitter and receiver had properly matching pre-emphasis / de-emphasis.

The Yaesu gives a lower disparity because its de-emphasis as measured above is low.

This twist of the signal amplitude reduces decode performance, and in the case of the Icom, sufficiently to prevent decoding at all.

One way of effectively rendering pre-emphais ineffective is to drive the AF input so hard that the limiter clips all audio, so after the pre-emphasis is applied the limiter removes it. 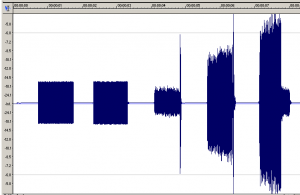 Above is an off air recording of two test tone segments, then three digis.

The waveforms provide an explanation of why VK1RGI at 190km (more than ten times the distance of VK2AMW and VK2RHR) is decoded with the Icom receiver whereas the others aren’t.

These are glowing examples of the failure of hams to implement standards / convention compliant infrastructure.

The proof of the pudding

That is all measurement and theory, but does it translate into a solution.

Well, inserting a 1000pF capacitor in series with the TNC input (which is about 50kΩ) puts a 6dB/octave rising slope on the audio, it supplies the pre-emphasis that was not supplied at the transmitter, and the system decodes packets reliably.

Not implementing pre-emphasis properly on the transmitter benefits ONLY receivers with no pre-emphasis, ie non-standard receivers.