AS/NZS 2272.2 sets out in Appendix E a method for calculation of near field strength of antennas, citing ANSI C95.3—1973 as authority.

This article comments on application to antennas other than those with a circular aperture.

The following figure is given for solution of antennas with estimated uniform illumination. 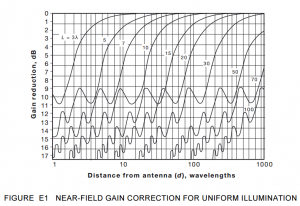 In view of the statement quoted above and FIgure E1, readers could be forgiven for thinking that curves for antennas of dimension less than 3λ will fall entirely in the upper left corner of Figure E1, and that to assume no gain reduction would be a conservative position.

NEC-4 model of a short dipole

A 1m vertical thin dipole was modelled in free space at 14MHz radiating 100W, and the near H field reported. 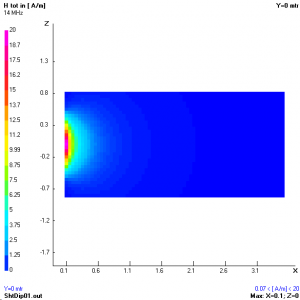 Above is a partial map of the H field, the dipole centre is located at (0,0). It is only at the very right hand edge of this chart at 3.5m distance that the time averaged H field falls below the ARPANSA requirement of 0.073A/m. The on-axis exclusion zone is therefore 3.5m. 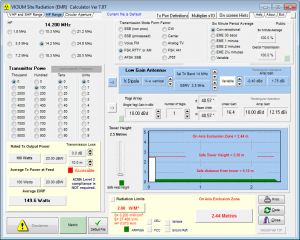 Above, the popular tool EMRCalc which claims to follow AS2272.2 (an expired predecessor to AS/NZS 2272.2) calculates the on-axis exclusion zone as 2.44m. 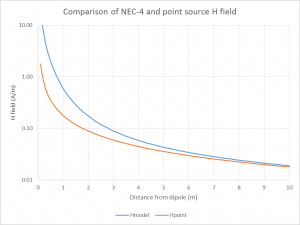