This article describes measurement of a STL for 4MHz using RG213 coaxial cable for the main loop and its tuning capacitance, and a smaller plain wire loop for transformation to 50Ω.

The loop comprises a length of RG213 formed into a loop and the ends brought together at the top where the inner conductor of one side is connected to the shield on the other side. There are no other connections to the main loop which electrically is a large loop of braided circular conductor of 8mm diameter broken at the top and an open circuit stub of the same length as the loop circumference is connected across the open loop ends. The loop circumference was chosen to resonate with the stub at 4MHz, and is 3.7m.

A smaller loop of 2mm copper wire of about 800mm circumference was suspended inside the main loop and was connected to a coax adapter and onto an antenna analyser for measurement. This smaller loop was distorted to change its effective area and so obtain a perfect match (VSWR=1) close to 4MHz. 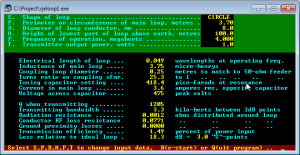 We might expect that the effective RF resistance of the braided loop conductor is somewhat higher than that of the copper conductor (77mΩ).

Ground proximity can be expected to add some equivalent series resistance to the loop.

Note the predicted half power bandwidth of 3.3kHz with total loop resistance of 78.3mΩ.

The actual loop half power bandwidth was measured to estimate the actual efficiency. The loop was matched exactly at one frequency and a sweep of input impedance made with an AA-600 analyser. 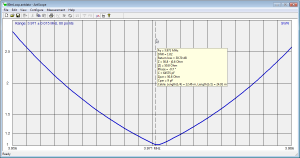 Above is the VSWR plot from the AA-600. VSWR=2.6 bandwidth corresponds to the half power bandwidth of the loop itself, much wider than predicted for the copper loop in free space using a lossless capacitor, and that implies much lower efficiency. 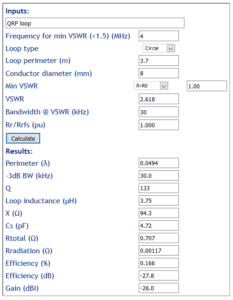 Whilst the loop might withstand the voltage associated with 1kW continuous input (5kV), it would not withstand the dissipation of almost 1kW continuous power in the loop losses. It might well withstand 1kW PEP SSB telephony due to the low Average/PEP ratio, and that would radiate just 1.6W PEP. It is a QRP antenna, whichever way you go.