A correspondent sent me a pic of a commercial balun asking “How does this balun work”. He explained that it is a “combination 1:4 balun followed by a current choke”. 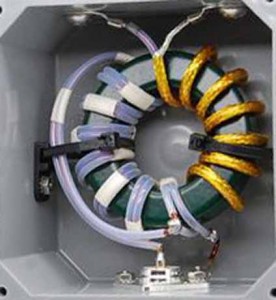 My first thought was that this is likely to have been a creation of Jerry Sevick… but let’s try and analyse it.

My interpretation of the pic is that on the left hand side there is a bifilar winding of 7 turns with the two parts connected series aiding. One end is connected to the input coax connector shield (or ground) and the other to the coax connector centre pin. 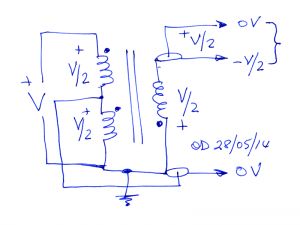 Above is a circuit of the arrangement. the notation of the right hand winding shows that it is a coax wound on the common magnetic circuit.

A voltage V applied to the input established a flux level in the core. There will be little flux leakage between the two primary winding parts, and the input voltage will divide equally over the windings establishing a flux level proportionate to V/2/7 Volts per turn.

So, with negligible flux leakage, the input voltage is double the output voltage and therefore a 12.5Ω load would be transformed to 50Ω hence the claim of 1:4 impedance transformation.

A quick test of an effective current choke is whether the current out of one load pin is equal to the current into the other load pin, even if one of those pins is grounded.

Clearly, ground either output pin near short circuits the transformer and spoils operation so it cannot be an effective current balun.

There will be some flux leakage depending on the core material (unknown) which will modify its behaviour somewhat.

This bears a striking resemblance to a device described at (Sevick 2001) Fig 9.14 (C). He qualifies its operation mentioning to use a balanced and floating load with this balun; and that it is not designed to match into a load which is centre tap grounded. have shown above that if either output terminal is grounded, it is spoiled. If the implication of this mumbo-jumbo is that this balun only works if the load is a simple two terminal device connected to the balanced output terminals, it is patent nonsense as there is no need for a balun for such a load as with only two terminals the current into one leg MUST exactly match the current out of the other leg.