A new Red Brick 70A ESC (including BEC) was received and checkout performed to select a SImonK module to load. 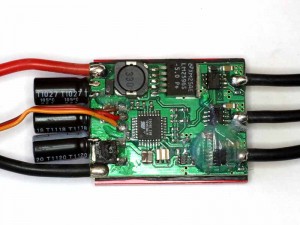 Above is a pic of the ESC with the aluminium plate removed from the component side of the PCB.  Residual hot melt adhesive can be seen near the MCU, it had been liberally covered in the stuff which is a nuisance to remove to enable connection to the MCU for reprogramming. The MCU is an Atmega8L which is fine, it seems that some Red Brick devices are shipping with an Atmega48/88 series MCU which is incompatible with current SImonK FW.

The RapidEsc database suggests the module is rb70a.hex, but previous experience suggests current product has a different pin usage, that of the rb50a.

SimonK commit 1f75da: (20140313) rb50a.hex with COMP_PWM was loaded on the RB70A and bench tested (initially using a current limited supply) with a Hobbyking 4822-690Kv motor. (This 22 pole motor has been reported as troublesome on some older releases of SimonK FW.)

Performed a suite of tests and no issues, no hint of sync problems, works fine.