A correspondent is designing a high performance transverter from 144MHz to 28MHz to be used with a Elecraft K3 transceiver.

A question that arises is just how good should the performance of the transverter be, what Noise Figure and Gain should it have without having performance that cannot be fully realised due to external noise.

This article lays out a method of answering that question, the techniques are applicable not just to a transverter design but to the configuration of an external LNA in any receiver system.

G/T is a good single metric for assessing the effect of various configurations. From (Duffy 2006):

The G/T ratio is a meaningful indicator of system performance, unlike quoting receiver noise temperature in isolation of sky temperature and antenna gain. The ability to receive weak signals is directly related to G/T, the higher G/T, the better. Signal/Noise ratio is proportional to G/T (Signal/Noise=S*λ2/(4*π)*G/T/(kb*B) where S is power flux density, kb is Boltzmann’s constant, and B is receiver quivalent noise bandwidth).

This article will build a G/T model of a high performance station and that model will be used to explore the sensitivity of G/T to a change in system parameters, in this example, transverter Gain.

Note that G/T given in (Edwards 2013) is not system G/T as defined in (ITU-R 2000), but an optimistic ratio that would be achieved only with a noise-less receiver and they do not compare to G/T as used in this article. Edwards’ G/T figure is also an overestimate as it does not include the losses of equipment between individual feed points and a single feed connector. (Duffy 2014b).

Firstly, a set of measurements was made of a prototype transverter using NFM and an RD2305 calibrated noise source. 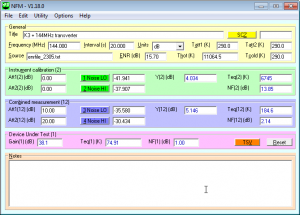 A G/T model of the scenario was constructed (Duffy 2006) to explore sensitivity of G/T to transverter Gain.

To set the scenario of a ‘best practice’ station, VE7BQH’s tables of performance of 144MHz Yagi arrays (Edwards 2013) is used as a guide for best Gain and total antenna noise, 25dBi and 210K for a bay of 4 long Yagis in an EME context. 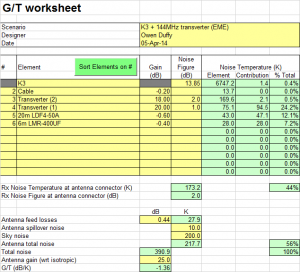 Above is a clip from the G/T model. Transverter stage 2 is shown as 0dB Noise Figure for simplicity in producing the next graph. The error is very small. 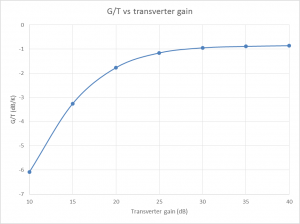 Above is a graph that shows G/T vs transverter Gain for the G/T scenario. This graph is specific to the scenario and should not be applied in other contexts.

It can be seen that G/T plateaus with total transverter Gain of about 30dB, so more Gain does not realise improvement in G/T, but less Gain degrades system performance.  The measured prototype transverter incorporated an 18dB second stage amplifier that could use a lower Gain device. 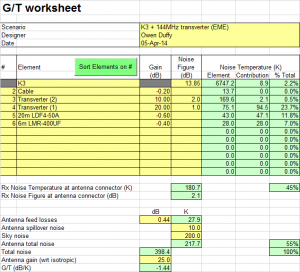 The clip above shows the G/T model with transverter stage 2 Gain set to 10db and Noise Figure 2dB. 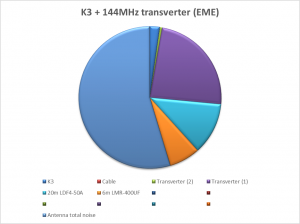 The pie chart above shows the contribution of the system elements to total system noise, the T term in G/T. This is quite a good achievement that could be really be bettered only by masthead location of the transverter (or its LNA).

A terrestrial G/T model was created by changing the external noise to 1000K. Again this figure comes from (Edwards 2013), but in the real world may range from a little less to a lot more. 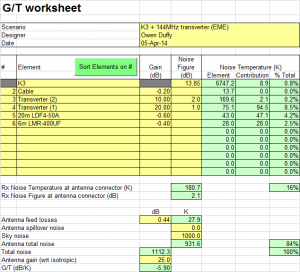 Above is the terrestrial G/T model. 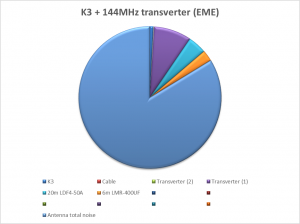 Above is a pie chart of the noise contribution of elements in a terrestrial scenario (Tant=1000K). It can be seen that the majority of noise is from external sources, and there would be very little benefit from masthead location of the transverter or its LNA (0.2dB/K improvement in G/T using the model).