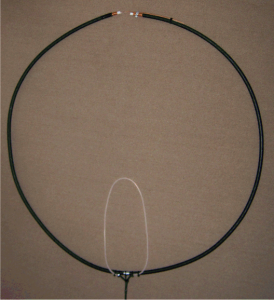 The loop above is 3.45m perimeter of LDF4-50A Heliax, and uses the full length of the Heliax as a stub for tuning  the loop to 5MHz.

The antenna is similar in concept to my 4MHz RG213 loop discussed at A QRP small transmitting loop evaluation though the LDF4-50 should have lower internal losses.

Martin took a thermograph of the loop after a period at 200W input. 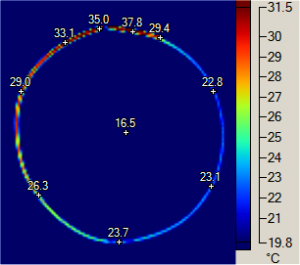 The thermograph above is oriented as per the photograph above, and it is notable that the region near the top and to the left of the top are higher temperature, tapering down as one travels anticlockwise around the tloop.

Why does this happen?

The temperature gradient on the thermograph shows that stub I^2 losses in the first quarter of the stub are relatively large. Outer surface conductor loss and internal dielectric loss appear relatively low as much of the loop is near ambient temperature.

The thermograph is a stunning illustration of how bad coax can be as a ‘capacitor’… yet it features in  lot of implementations.