I was sent some further info on the bootloader firmware and adapter hardware.

Initial experiments using an adapter that I use for a range of this type of application were unsuccessful. On examining the waveforms with a ‘scope, it was apparent that a lower value of pull-up resistor was required. 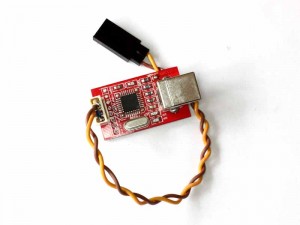 Above is the adapter, wired into the plug on the FTDI module is a diode for 1-wire open collector, and a 2k2 pull-up resistor. This works reliably at 115k, waveform a little slow at 230k… though it seemed reliable. From reading the bootloader source, the bootloader may use CRC error detection on the serial link.

So, this all integrates nicely with BLHeliSuite, and transfer times are quite fast.

I am still of two minds over the AVRootloader, issues / differences to SimonK bootloader include:

To be able to switch back and forth between SimonK and BLHeli for comparative evaluation, I may reinstall the SimonK bootloader for its flexibility and additional features.

So, now it is back to bench testing and comparison of FW on some different drive systems.

I already use BLHeli on Silabs (Skywalker 40A) on one quadcopter and it works well, if the Atmel port is a direct port, it should work similarly on Atmega8 based ESCs.

It does appear that some newer Atmel based ESCs are using Atmega48/88 series chips… creating a port job for developers.