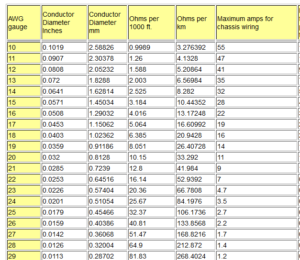 So, the poster recommends wire with chassis wiring rating of 2A for 50W with reserve capacity for worst case VSWR=4. END_OF_DOCUMENT_TOKEN_TO_BE_REPLACED

Many antennas can be represented near their series resonance as a series RLC circuit, and in many cases R changes very slowly with frequency compared to X. This provides a convenient and good approximation for the behavior of the antenna impedance in terms of a simple linear circuit. 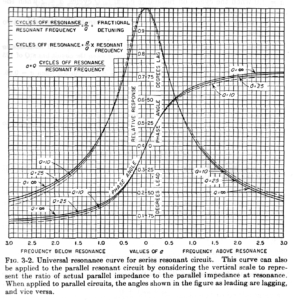 Above is a chart of the Universal Resonance Curve from (Terman 1955). The chart refers to “cycles”, the unit for frequency before Hertz was adopted, and yes, these fundamental concepts are very old. END_OF_DOCUMENT_TOKEN_TO_BE_REPLACED

The source used for these tests is a battery powered low power transmitter  driving a 0.6m square loop. Radiated power is very low (of the order of -60dBm EIRP), and received signal on the station receiver is less than -73dBm. 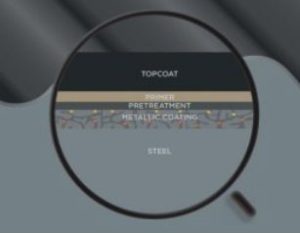 For this test, the submain was turned off at the main switchboard, so there is not equipment in the shed powered up, but the supply neutral is still connected and bonded to the shed steel work and shed PES ground electrode. 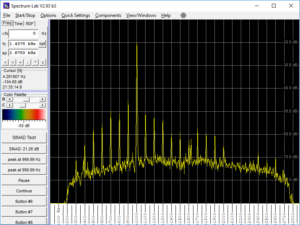 Above, the spectral response of receiver output, there are a number of side products at 100Hz intervals, presumably some form of IMD. At higher radiated power, products at odd 50Hz intervals become visible, though at much lower level than the 100Hz products. END_OF_DOCUMENT_TOKEN_TO_BE_REPLACED 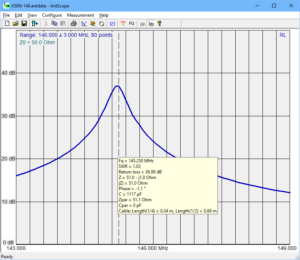 The X50N does not have VSWR or Return Loss specs, but we might expect that at the antenna itself, VSWR<1.5 which implies Return Loss>25dB. Measuring into feed line, you can add twice the matched line loss to the Return Loss target (see why Return Loss is a better measure).
END_OF_DOCUMENT_TOKEN_TO_BE_REPLACED 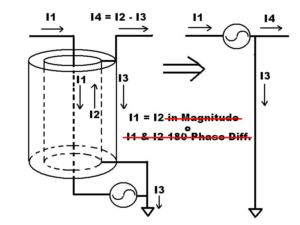 Above is Thompson’s diagram of currents in a feed coax, and it contains two significant errors that could / would lead to formation of the wrong concepts in a learner’s mind. END_OF_DOCUMENT_TOKEN_TO_BE_REPLACED 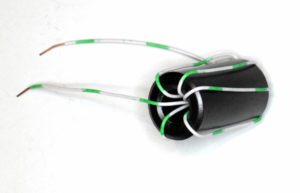 Above is the prototype RFC wound with data cable wire for the purpose of measurement. In application it could be wound with 1mm enamelled copper or PTFE insulated wire (Curie point is lowish at 120°+, but it still benefits from higher temperature insulation). END_OF_DOCUMENT_TOKEN_TO_BE_REPLACED

This article continues on from Riding the RF Gain control – part 3 and explores the operating advice when applied to the next generation of receivers.

Lets jump a generation to the direct sampling SDR configuration.

In this category, I am covering receivers that do not convert the receive signal to an intermediate frequency, the ADC samples the signal at its off-air frequency.

The receivers may or may not have the following elements ahead of the ADC:

Because there may be no amplification prior to the ADC in some operating configurations, a voltage controlled attenuator may be used to prevent overflow of the ADC, this is the ‘analogue’ part of the AGC system. END_OF_DOCUMENT_TOKEN_TO_BE_REPLACED

Critically, the Analogue to Digital Converter (ADC) had an overflow point, and overflow of the ADC creates serious IMD and major degradation of received signal, overflow has to be prevented at all cost. To limit the power delivered to the ADC, a narrow ‘roofing’ filter usually preceded it, and the channel filter was digitally synthesised. END_OF_DOCUMENT_TOKEN_TO_BE_REPLACED 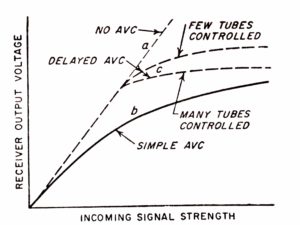 The diagram above from (Terman 1955) illustrates the behaviour for AVC, the term that was used with AM receivers at the time and superseded by AGC for SSB receivers. END_OF_DOCUMENT_TOKEN_TO_BE_REPLACED