The article On negative VSWR – Return Loss implications raised the question of the validity of the concept of that P=Pfwd-Prev.

The Superposition Theorem is an important tool in linear circuit analysis, and is used to find the combined response of independent sources. Superposition applies to voltages and currents, but not power.

To find the real power P at a point in a transmission line, we need to find the real part of the product of voltage and current considering their phase difference. We can write P=real(V*conjugate(I)).

The voltage at a point is that due to superposition of the voltages due to forward and reflected waves, V=Vf+Vr. Likewise for current, I=If+Ir.

So now we can write P=real((Vf+Vr)*conjugate(If+Ir)). When this is expanded, there are four terms, a VfIf term, a VrIr term and two cross products.

Practice is to call the VfIf term, Term1, forward power Pfwd, and magnitude of the VrIr term Term4 reverse (or reflected) power Prev, and to ignore the VfIr and VrIf cross product terms Term2 and Term3, but that is not always safe as they may each contribute significant positive (forward) and negative (reverse) power at various points along the line. 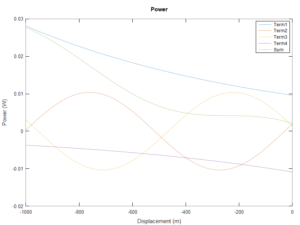 Note that at the load the magnitude of Term4, the so-called Prev, is greater than Term1, the so-called Pfwd but this does not lead to negative real power (ie power flowing from load to source) because P=Term1+Term2+Term3+Term4 (Sum curve) and it positive at all displacements and monotonically decreasing from source to load (ie there is no hidden power gain in the maths). For the same reason, Return Loss calculated from Term1 and Term4 alone is questionable.

When Zo is real, the phase difference between Term2 and Term3 is 180°, and since their amplitudes are equal, they cancel leaving P=Term1+Term2 and we can say P=Pfwd-Prev.

In the real world, practical transmission lines are not Distortionless, but the case for real Zo can often be used as a good approximation where:

Measurements in that context should always deliver results consistent with purely real Zo, but keep in mind that what is indicated is not strictly what is happening on the adjacent real world transmission line.

In the context of instruments calibrated for real Zo, P=Pfwd-Prev is sound, ReturnLoss=20*log(1/ρ) is sound.