I am asked about my use of the term Distortionless Lines from time to time, often in the vein of they don’t exist, so why discuss them?

The concept derives from the work of Heaviside and others in seeking a solution to distortion in long telegraph lines.

The problem was that digital telegraph pulses were distorted due to different attenuation and propagation time for different components of the square waves. 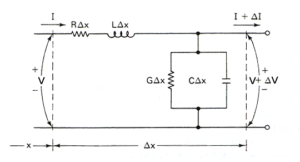 Characteristic impedance Zo and complex propagation coefficient γ can be derived from the model, and it becomes apparent that only under certain conditions is the attenuation and phase velocity independent of frequency.

Heaviside determined that condition was that G/C=R/L, so this is the condition for a Distortionless Line.

That same condition means that Zo is a purely real number, and if Zo is purely real, then the line is Distortionless.

Note that Lossless Line is a special case of Distortionless Line, and necessarily Zo is purely real.

Let us look at some common operations.

Waves add, the E and H fields add vectorially, as do their V and I equivalents.

It happens that in the special case of purely real Zo (ie Distortionless Line) that the directional powers add, but they add by virtue of expansion of the expression for adding V and I (which simplify when Zo is real).

Most use of a Smith chart involves normalising plotted values to some real Zref. In so doing, an assumption is made that constant VSWR circles are wrt that Zref, and solutions (eg matching) based on that are conditional on the assumed real (Distortionless) Zref.

The clean separation of real and imaginary Z and Y components and the arcs of constant R, X, B, G on a Smith chart are conditional on real Zo, as is the assumption that all practical values of Z map inside the ρ=1 circle. (The assumption that ρ<=1 depends on real Zo.) The loss of this property quite restricts its usefulness.

None of this is to suggest that a Smith chart with Zref including a significant imaginary part is invalid… just many things we have learned to do with a ‘real’ Smith chart may not be valid (ie within acceptable error limits), and the scales are no longer as simple and useful as the chart devised by Philip Smith.

ρ, Return Loss, and VSWR are derived from the complex reflection coefficient Γ. Calculating Γ wrt some nominal real Zo involves some error, and raises the question of whether application of those to a real scenario (where Zo is different, eg not real) is within acceptable error limits.

S parameter techniques assume additive power, and that may not be appropriate for some problem solutions. The analysis tools effectively coerce a Distortionless Lines treatment.

Practitioners use analytical techniques that depend on an assumption that Zo is real (ie Distortionless Line) widely, and often without acknowledging it or even thinking about the implications.