…The spec for type 43 makes it clear that it should never be used for HF unun construction. It is specifically engineered with a complex permeability that makes the core lossy on most HF frequencies. Since an unun is not a TLT (transmission line transformer) but rather an autotransformer, a low loss core is essential for efficient operation….

Now it contains the very common FUD (fear, uncertainty and doubt) that masquerades as science in ham radio, but without being specific enough to prove it categorically wrong. To a certain extent, the discussion goes to the meaning of efficient operation. END_OF_DOCUMENT_TOKEN_TO_BE_REPLACED

There are common some key properties that are relevant:

END_OF_DOCUMENT_TOKEN_TO_BE_REPLACED

The LTSPICE model was of a ‘test bench’ implementation of the balun which comprised an air cored solenoid of two wire transmission line, with a slightly asymmetric lumped load.

This article discusses limitations of SPICE in modelling practical baluns.

Guanella’s 1:1 balun and his explanation – Zcm gave the characteristics of a example ferrite cored balun. 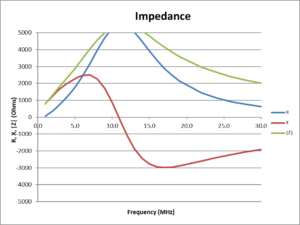 Above is Zcm of a 11t balun wound on a FT240-43 toroid. The ferrite core acts on the common mode choke element and has negligible effect on the differential transmission line mode. The key characteristics are: END_OF_DOCUMENT_TOKEN_TO_BE_REPLACED 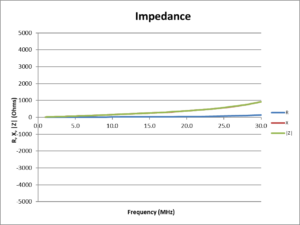 Above is Zcm for the example balun. It is very low at low frequencies and rises to 133+j914Ω at 30MHz. END_OF_DOCUMENT_TOKEN_TO_BE_REPLACED

It is now 75 years since Guanella’s article “New methods of impedance matching in radio frequency circuits” described the form and operation of what we now commonly call a “Guanella 1:1” balun, but hams being hams also use other terms like “isolator”, “common mode choke”, “current choke” and some insist is it not a balun at all.

In fairness, Guanella did not call the thing a “balun”, but if we accept a very general meaning of balun to be any device intended to facilitate or permit a different state of balance to either side of itself, this is a balun. 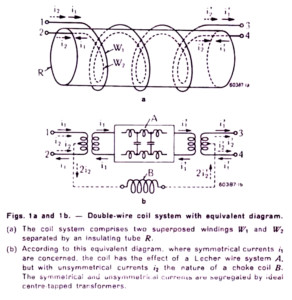 Above is an extract from (Guanella 1944), and contains an almost complete description of the 1:1 balun. The ideal centre tapped transformers shows are a device for separating the differential and common mode currents so that appropriate elements can be used for those currents. END_OF_DOCUMENT_TOKEN_TO_BE_REPLACED

So, you might ask what they do, what they are good for, and why they are used. END_OF_DOCUMENT_TOKEN_TO_BE_REPLACED 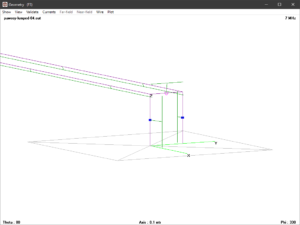 Above is a plot of current magnitude and phase from 4NEC2. The current on the two vertical conductors containing the 33 and 66Ω loads is quite different, and the product gives load voltages that are approximately equal in magnitude and opposite in phase. END_OF_DOCUMENT_TOKEN_TO_BE_REPLACED

Whilst these have been quite popular with VHF/UHF antennas, the question arises as to how they work, and whether they are effective in reducing common mode current IIcm) for a wide range of load scenarios. END_OF_DOCUMENT_TOKEN_TO_BE_REPLACED 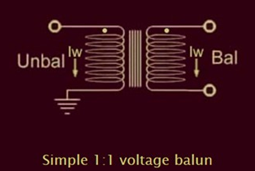 END_OF_DOCUMENT_TOKEN_TO_BE_REPLACED

An online expert quoted the following diagram from VK5AJL.

It is labelled as a simple 1:1 voltage balun, which is to imply that it is NOT a current balun (they are mutually exclusive). END_OF_DOCUMENT_TOKEN_TO_BE_REPLACED