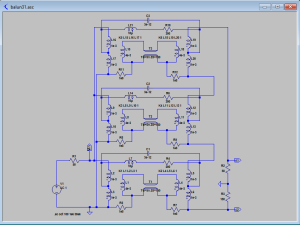 Above, the same component baluns were interconnected to make a 9:1 balun. Note that Zo of the TL section has been increased to 150Ω to suit the notional nominal 50 to 450Ω broadband transformer. END_OF_DOCUMENT_TOKEN_TO_BE_REPLACED 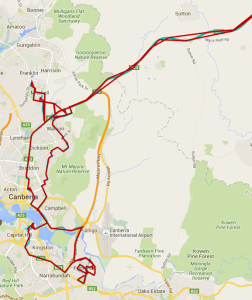 Above is a zoomed in view of the Canberra end of the trip, and I am pleased to say that the zig zag double backs that have been evident in recent trips did not occur. The principal reason is that with a path of WIDE1-1, the packets did not pass through VK2RWG-1/VK2KAW. END_OF_DOCUMENT_TOKEN_TO_BE_REPLACED

David, VK3IL posted EFHW matching unit in which he describes a ferrite cored transformer matching unit that is of a common / popular style. 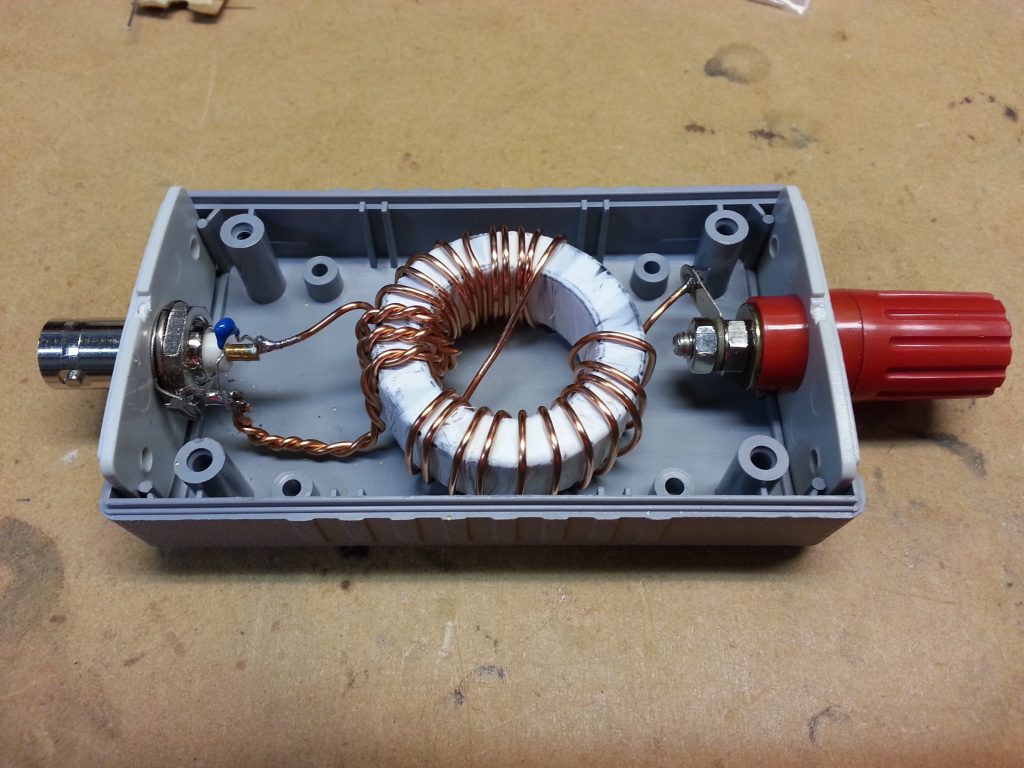 Above is David’s pic of his implementation. It is a FT140-43 toroid with 3 and 24t windings and note the 150pF capacitor in shunt with the coax connector.

The popular belief is that these are a broadband impedance transformer with impedance ratio equal to the square of the turns ratio, 64 in this case and therefore a broad band match from 3200Ω to 50Ω.

To his credit, David took some measurements of several different variations and reported them in his article. 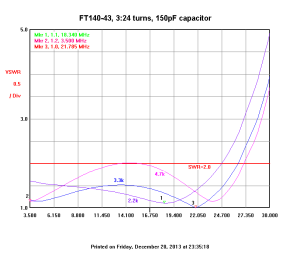 Above are David’s measurements of the subject transformer.

Lets explore the matching detail for the case of a 3.3kΩ load at 22MHz, and using the 150pF shunt cap.

Superficially, you might convince yourself that this is explained by the turns squared story, but the 150pF doesn’t reconcile with that story, nor does the variation with frequency, eg the rapid change above 22MHz. END_OF_DOCUMENT_TOKEN_TO_BE_REPLACED

Above is a simulation of the T network in RFSim99, component values are adjusted for a match and inductor Q is calibrated to the measured loss of 1.4dB. END_OF_DOCUMENT_TOKEN_TO_BE_REPLACED

Eric posed a quick quiz for the masses to test their knowledge under his heading “Do you really understand impedance matching?”

For your convenience, I will quote his challenge here.

All connections are made with low-loss coaxial cable. The antenna tuner is high quality with negligible losses.
According to standard conversion charts, we find that 4:1 SWR will give us 36% reflected power. Keep that number handy.
Now, we set up the experiment. First, set the slugs on BOTH wattmeters to read REFLECTED power.
Turn on the transmitter, and adjust the antenna tuner for zero reflected power on Bird #1. Switch to forward power, and set transmitter output to exactly 100 watts. Readjust antenna tuner if necessary to achieve zero reflected power, while maintaining 100 watts forward.
Go to Bird #2 and confirm that reflected power is 36 watts.
Question: What is the FORWARD power on Bird Wattmeter #2? How you answer this question determines if you understand the conjugate match theorem or not.

Let us assume that the transmission lines are 50Ω, and that the Bird wattmeters are calibrated for 50Ω.

So, to extract the key information, we have a lossless system (KL7AJ is a lossless kind of guy) and the load is stated to be VSWR=4. END_OF_DOCUMENT_TOKEN_TO_BE_REPLACED

There are some who insist that it is not possible to make practical measurements of a common mode choke using a one port analyser, and recommend the ‘S21 method’

Above, (Agilent 2009) describe the common methods of impedance measurement using a VNA. The first method is often supported with direct display of R,X, and possibly a Smith chart presentation of Γ. END_OF_DOCUMENT_TOKEN_TO_BE_REPLACED 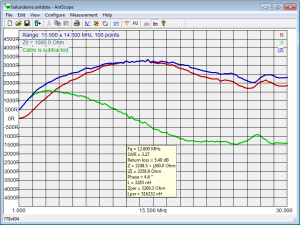 Above is a plot from that article. I cannot be sure what version of Antscope was used to create the graph, but it was no later than v4.2.57, as one of the ‘improvements’ of v4.2.62 and v4.2.63 was to reduce zooming of the Z scales to a maximum of 600Ω. END_OF_DOCUMENT_TOKEN_TO_BE_REPLACED

N6PAA gives a measured VSWR curve for the matched antenna, and the VSWR=3 bandwidth as scaled from the graph as 20kHz, from which we can calculate the half power bandwidth and eventually, efficiency. There is some suggestion that some measurements were taken indoors, this analysis assumes that the relevant measurements were taken outdoors as pictured. END_OF_DOCUMENT_TOKEN_TO_BE_REPLACED

Roberts gives the VSWR=2 bandwidth as 5.4kHz, which if we assume that it was adjusted for a perfect match mid band, we can calculate the half power bandwidth and eventually, efficiency. END_OF_DOCUMENT_TOKEN_TO_BE_REPLACED 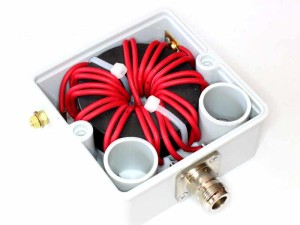 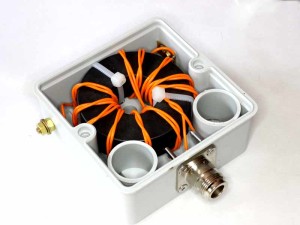 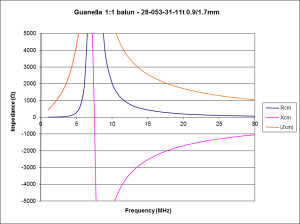