I mentioned in An NEC-4.2 model of VK5BR’s 1m square loop for 20m that Butler’s ~1m square loop was too large to be considered strictly a Small Transmitting Loop (STL):

The data above appear to ignore some important factors, and estimate some others based on an assumption of uniform current. END_OF_DOCUMENT_TOKEN_TO_BE_REPLACED

Small Transmitting Loops (STL) are loops with approximately uniform current around the loop.

(King 1969) gives us expressions for an equivalent circuit of the ‘loop mode’ and ‘dipole mode’, it consists of parallel branches for each mode of series R and X:

Plotting these and the combined total Rt and Zt for a 1m diameter (perimeter p=3.14m) lossless circular loop of 20mm diameter conductor from 2-30MHz in free space gives an insight into their relative magnitudes at different frequencies. END_OF_DOCUMENT_TOKEN_TO_BE_REPLACED

C=HD where C is in pF, D in cm, and H comes from a given table of length/diameter ratios from 0.1 to 1.0. ARRL cites (Medhurst 1947) for this expression. Medhurst’s work was for solenoids.

A 1m diameter loop of 10mm diameter conductor has l/d=0.01, so it is not covered by the table, and you might form the view from the table that H tends to 1.0 or thereabouts as l/d approaches 0, but that is an extrapolation and dangerous. END_OF_DOCUMENT_TOKEN_TO_BE_REPLACED

This departure can be compensated for to some extent by addition of a small equivalent shunt capacitance. END_OF_DOCUMENT_TOKEN_TO_BE_REPLACED

The data above appear to ignore some important factors, and estimate some others based on an assumption of uniform current. END_OF_DOCUMENT_TOKEN_TO_BE_REPLACED

The line taken broadly is to introduce his own interpretation of efficiency and to challenge by experimental evidence other views on expected efficiency. END_OF_DOCUMENT_TOKEN_TO_BE_REPLACED 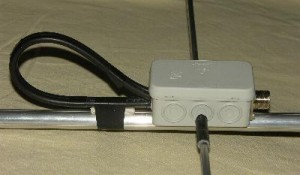 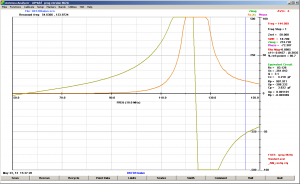 A correspondent having seen recent discussion and models on eHam regarding steel dipoles, asked about the accuracy of my articles:

The eHam article gives the gain of a low half wave steel dipole on 160m as 0.5-1dB less than copper depending on steel composition. (The thread was entitled “galvanised steel wire”, but the model was clearly labelled steel. For discussion of the effect of galvanising, see Galvanised steel wire OCF dipole.)

The model used is not fully exposed, but the results are unlikely unless perhaps the permeability of the steel was ignored (NEC-2 does not natively model µr>1). 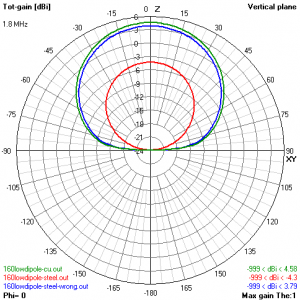 Above are the gain plots from NEC-4.2 for three different material types, copper, steel, and steel resistivity with µr=1 (-wrong). END_OF_DOCUMENT_TOKEN_TO_BE_REPLACED

This Jan 2011 article has been copied from my VK1OD.net web site which is no longer online. It is for reference in further articles discussing the popular reflections explanations. The article may contain links to articles on that site and which are no longer available.

The statement is often made to the effect that:

VSWR will damage a HF ham transmitter, and the mechanism is that the ‘reflected power’ in a standing wave will be absorbed by the Power Amplifier (PA), increasing heat dissipation and damaging the PA.

There are two problems with this statement: END_OF_DOCUMENT_TOKEN_TO_BE_REPLACED

The Carolina Windom is very popular with modern hams, and at the same time is commonly the discussion of problems in online fora.

The question is whether it is its popularity that is the reason for cries for help, or whether there is something inherently high risk in the ‘design’.

The first type is the classic ‘original’ Windom with single wire feed which folk lore explains as a horizontal wire being tapped at a point where Z matches the vertical  ‘single wire’ feeder, that there is not a standing wave on the feed line, and that it does not radiate. Traditional characterisation as a single-feeder Hertz denies the existence of the vertical radiating element.

It is a folly to designate the vertical wire as a non-radiating feeder, it carries an RF current that contributes to radiation just like current on the horizontal wire does. END_OF_DOCUMENT_TOKEN_TO_BE_REPLACED