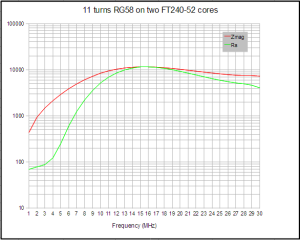 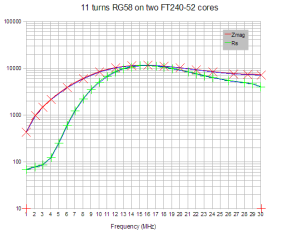 To compare the two, I have roughly digitised G3TXQ’s graph above and plotted the data over that from my own model (with linear Y scale). END_OF_DOCUMENT_TOKEN_TO_BE_REPLACED

A correspondent asks about the effect of RCA connectors at HF on his proposed noise bridge. The question is very similar to that considered at Exploiting your antenna analyser #13 for UHF series connectors.

I have made a simple measurement of a BNC 50Ω termination (to check calibration) then inserted a BNC-RCA and RCA-BNC adapter.

To jump to the chase, it also has a Smith chart plot up to 200MHz that suggests it might be well modelled by a TL segment of 30-35Ω. 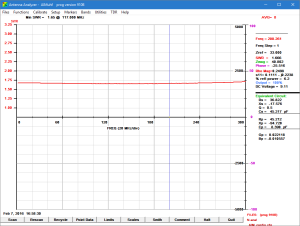 Above is a plot of VSWR when Zref is adjusted for the flattest response from DC, and it can be seen that with Zref=33, response is quite flat to 200MHz. END_OF_DOCUMENT_TOKEN_TO_BE_REPLACED

A little rigging job this week, taking down some towers at another place…

I thought there were no spectators, but the inevitable video has emerged! 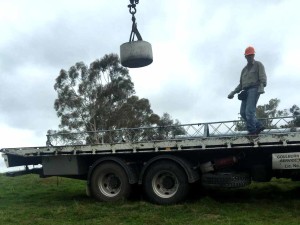 Abusers of Nally towers know what that is on the hook! 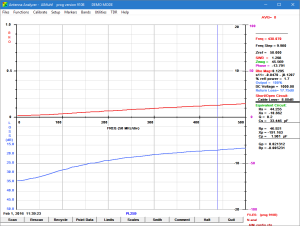 Above is a plot of ρ and ReturnLoss for the DUT. ReturnLoss curiously is plotted ‘upside down’ as ReturnLoss increases downwards… a quirk of AIM software, but remember that ReturnLoss in dB is +ve.
END_OF_DOCUMENT_TOKEN_TO_BE_REPLACED 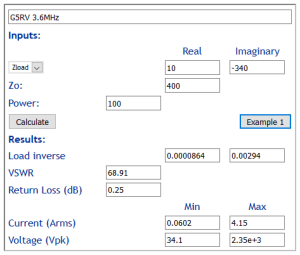 Above is the built-in example of a G5RV with tuned feeder on 80m with feed point impedance derived from a modelling package. The voltage and currents calculated are those for a long lossless feed line.
END_OF_DOCUMENT_TOKEN_TO_BE_REPLACED 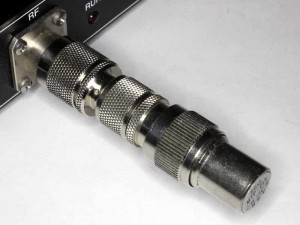 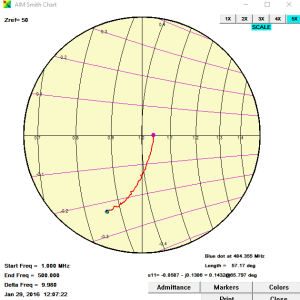 Above is an expanded scale centre of the Smith chart of the sweep. END_OF_DOCUMENT_TOKEN_TO_BE_REPLACED

Above is an extract from the brochure for Icom’s newest offering, the IC-7300. END_OF_DOCUMENT_TOKEN_TO_BE_REPLACED

Often we make measurements through a section of transmission line, and the measurements are wrt the reference plane, which for many analysers is the connector on the instrument.

Some analysers, or their associated software allow the effects of the transmission line to be backed out. 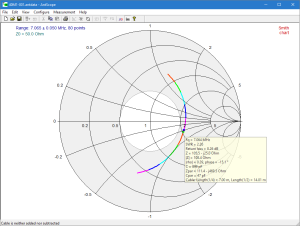 Above is a Smith chart view of measurement of a test antenna through some length of RG58. The antenna will have R<50Ω at minimum VSWR, so the angle of the complex reflection coefficient Γ will be close to 180° at the feed point. Antscope uses a different notation, but shows here the angle at the point of measurement to be -15.1°, so we need to increase it by 180–15.1=195.1°, which will take about half that electrical length of line, 97.6°. From TLLC, I calculate the length involved is 7.6m of RG58, which is an estimate that gives a starting point for backing out the cable. END_OF_DOCUMENT_TOKEN_TO_BE_REPLACED

External noise is the noise external to the receiver system. 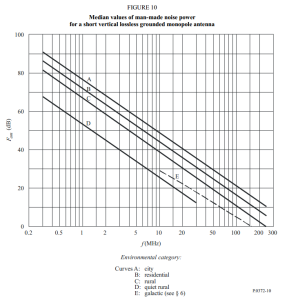 Above is Figure 10 which gives guidance on the expected median ambient noise figure.

The table above gives calculates noise power in a 2kHz bandwidth receiver with lossless antenna system for the lower ham bands from the equations given in (ITU-R 2015). Note that the medians vary somewhat with location and time, see (ITU-R 2015).

Noise can be expected to vary by hour of day, from day to day, and season to season. Importantly, noise may vary with direction, eg pointing through busy roads, office buildings, shopping centres etc, neighbouring buildings, powerlines etc.

Measurement of external noise is not too difficult, but rarely do hams understand quantitatively their own noise environment.

Noise contributed by the various stages of a receiver system can be reduced to an equivalent input noise at the input of a noiseless receiver, and that is often expressed in the form of the receiver Noise Figure.

A typical receiving system for 6m would have a noise figure around 6dB (at the antenna connector). As will be seen, there is little need for better noise figure.

The noise floor of a receiving system with NF=6dB (4.5dB receiver and 1.5dB line loss) is -135dBm. In such a receiver, AGC action is typically delayed until the signal is around 25dB above the noise floor, around -110dBm in this case. There will be no S meter deflection in traditional receivers below AGC onset. 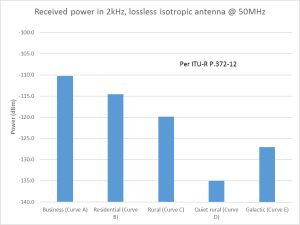 Above, the median expected noise falls below the typical AGC threshold (S meter threshold) for the example receiver (-110dBm), and apart from Curve A, the noise may not cause S meter deflection.

In a single isolated measurement at my location, I measured -123dBm which is in the range expected of a semi rural residential with underground power.

The internal and external noise power add, but it is the power in watts or in equivalent temperature that can be added, not the dBm figure. 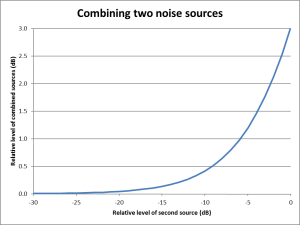 The chart above shows the effect of combining two additive power values. If they differ by more than 20dB, the sum is within 0.05dB of the higher power. For lesser ratios, the weaker power needs to be factored in, and the graph provides a simple means if you don’t want to crunch the numbers.

One of the recent market directions is so-called low noise antennas. The term is used to describe directional antennas with reduced side lobe response inspired perhaps by (Bertelsmeier 1987) who contrived a rather naive statistic based on the noise power captured by a Yagi in free space tilted up 30° from the Z=0 plane and excited by two arbitrary noise scenarios in the upper and lower hemispheres, the statistic labelled G/Ta, transformed by others to G/T in  ignorance of the true meaning of the industry term G/T.

Reduced side lobe response sounds a good idea, but what is the expected impact on total external noise power received?

For a Yagi in free space, if the distribution of external noise is uniform in three dimensional space:

But we are not in free space, are we.

For Yagi pointing horizontally over flat ground, if the distribution of external noise is evenly distributed over all azimuth headings:

The situation changes if the noise intensity is not uniform with azimuth bearing and elevation if there are more concentrated noise sources.

It should be apparent that reducing the average gain off the main lobe reduces power from noise sources to the side and rear, but if the pattern is not even, and it never is, then it is a matter of chance as to whether pattern nulls or peaks coincide with concentrated noise sources when pointing in a desired direction.

The complexity of this environment mitigates against a meaningful single metric for the noise capture of a Yagi.

One cannot argue against the logic that reduced sidelobe gain is an advantage in reducing off boresight noise, but it does imply increased main lobe gain (and possibly noise pickup) the question is really how much net advantage there is on 50MHz in your station with your noise environment on the paths you see as high priority.