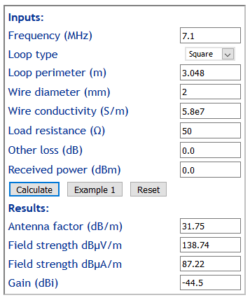 The NEC model’s 31.83 dB/m is close to the calculator prediction of 31.75dB/m, but includes the benefit of the lossy ground reflection . END_OF_DOCUMENT_TOKEN_TO_BE_REPLACED 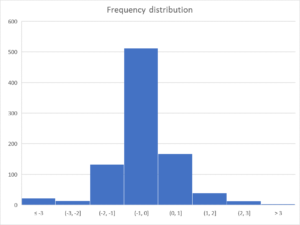 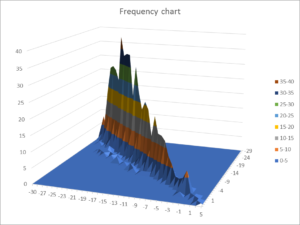 Lets look at in 2D. END_OF_DOCUMENT_TOKEN_TO_BE_REPLACED

I have a 30″ square loop of #12 wire that I use for receiving, and when I attach it to the receiver on 40m, the audio output voltage goes up three times or more. Do I need an amplifiers, or will it worsen things?

It is possible to determine the ambient noise temperature from the true noise power change over that of a matched termination.

The equivalent noise temperature of the receiver is implied by its Noise Figure when it is terminated with a matched termination. Noise due to an open circuit or short circuit input is not defined.

The correspondent re-measured with a termination, and as it turned out, the results were much the same, so lets work the case of voltage increasing by a factor of three.

Without going any further, we can calculate the degradation in External S/N by the receiver, total noise power is proportional to (3^2) times internal noise, so S/N degradation is 10*log(9/(9-1))=0.51dB… very little.

It is true that an amplifier is unlikely to improve things and will be likely to degrade things because of intermodulation distortion that is inherent in them, more so if it overloads on broadband signal input.

But let’s go on to estimate the ambient noise figure Fa.

It is really important for this process that the AGC does not change the receiver gain, and there is no overload or clipping. The latter means DO NOT SWITCH THE AGC OFF, the S meter deflects, you need extra input attenuation to keep things linear.

Now lets assume the receiver has a Noise Figure of 6dB (most modern HF transceivers are in that ball park).

We need to estimate the gain of the antenna, we will use Calculate small loop Antenna Factor. 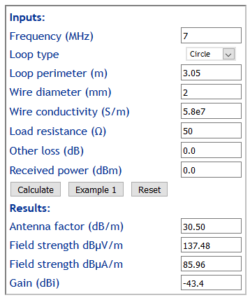 Ok, terminated in 50Ω, the untuned small loop has a gain of -43.4dBi. So, it captures only a very small portion of the external noise, but even so it delivers sufficient to the receiver to increase the output voltage by a factor of 3. END_OF_DOCUMENT_TOKEN_TO_BE_REPLACED 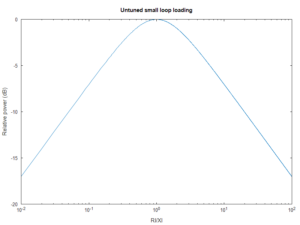 There is a maximum where Rl=Xl, and the power captured falls away either side. END_OF_DOCUMENT_TOKEN_TO_BE_REPLACED

This article presents a noise gain analysis for the 8m perimeter loop used in the article Small untuned loop for receiving to achieve a S/N degradation of no worse than 1dB at 7MHz. 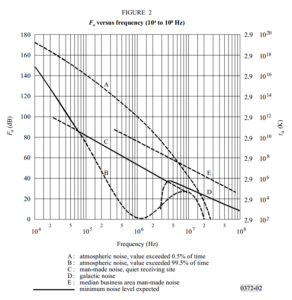 This article walks through a case study for a small single turn untuned loop with attached 50Ω balanced preamplifier and 50Ω coaxial output to a high grade communications receiver. The objective is to achieve system S/N ration not poorer than 1dB below the external S/N (ie ExternalS/ ExternalN).

Such an antenna has utility in that it can be rotated to null out a strong noise source from a direction other than the desired signal.

This is a rework of an earlier article which presented a ‘back of the envelope’ noise and gain analysis now presented as a more accurate model embodied in a spreadsheet to allow convenient exploration of variations to the scenario. 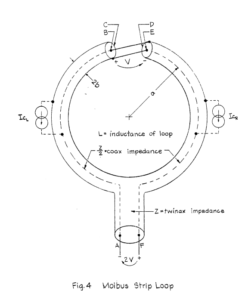 Feature 1 is claimed to improve S/N when irradiated by gamma radiation, the effect would be of most benefit in the event of a nearby nuclear bomb. Given that most ham stations are not EMP hardened, this is unlikely to be of material benefit to those ham stations. END_OF_DOCUMENT_TOKEN_TO_BE_REPLACED

There are many possible explanations for why an antenna captures less noise power than another, this article discusses the distribution of electric and magnetic fields (E and H) very near to a radiator, and the power captured by antennas that respond more to E or H fields.

Electromagnetic radiation consists of both and E field and a H field, and they are in the ratio of η0=µ0*c0Ω, the so-called impedance of free space, often approximated to 120πΩ or 377Ω. Close to a radiator there are components of E and H additional to the radiation components, the ratio of E/H is not simply 377Ω.

Fig 1 shows the magnitude of the ratio E/H near a quarter wave vertical over average ground at 3.6MHz. |E/H| depends on location near the antenna, and with increasing distance it converges on 377Ω.
END_OF_DOCUMENT_TOKEN_TO_BE_REPLACED 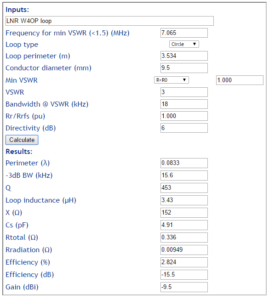 The actual value for radiation resistance is likely to be with -50-+100% of the free space value used, and that rolls up as an uncertainty of +/-3dB in the calculated efficiency and gain. END_OF_DOCUMENT_TOKEN_TO_BE_REPLACED 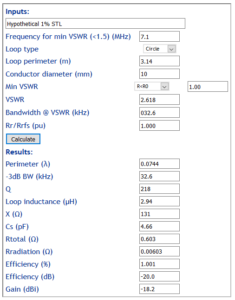 Above is a model hypothetical 1m diameter loop of 10mm conductor on 40m with 1% radiation efficiency.

Lets say it is rated for input power being the lesser of 10W continuous, or 30W PEP SSB. END_OF_DOCUMENT_TOKEN_TO_BE_REPLACED