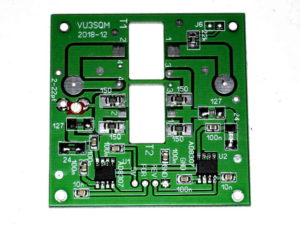 Above, the PCB populated with the SM parts and soldered. It was soldered in an IR reflow oven. END_OF_DOCUMENT_TOKEN_TO_BE_REPLACED 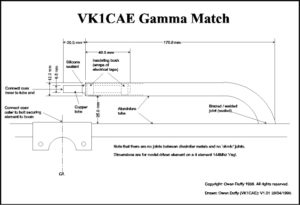 Above is a dimensioned drawing of the construction. END_OF_DOCUMENT_TOKEN_TO_BE_REPLACED 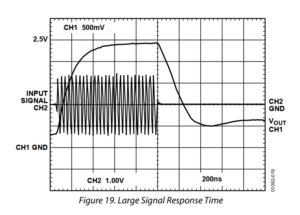 The chart above from the AD8307 datasheet shows that the unfiltered response to a burst of RF has a rise time of well under 1µs. END_OF_DOCUMENT_TOKEN_TO_BE_REPLACED 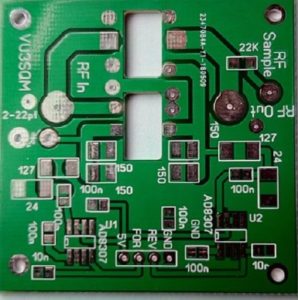 Above, the top side of a PCB. END_OF_DOCUMENT_TOKEN_TO_BE_REPLACED 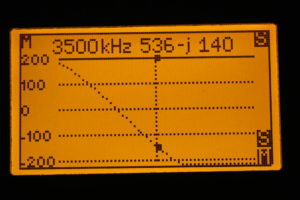 Above is a swept Z measurement just above the half wave resonance of the line section. The impedance at the marker is comparable with that measured using an AA-600, so I would accept that it is probably correct. The graph is another matter. END_OF_DOCUMENT_TOKEN_TO_BE_REPLACED

The video shows that whilst the up down buttons seem to work reliably and consistently in ‘menu’ mode, they do not do so when trying to adjust the frequency. END_OF_DOCUMENT_TOKEN_TO_BE_REPLACED 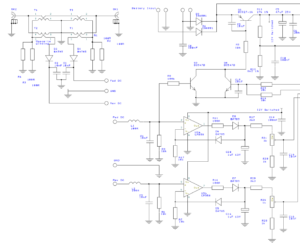 The directional coupler at top left contains half wave peak detectors for forward and reflected waves. They are wired to the two compensated op amps at lower right (the connections are not shown on the circuit as the coupler may be remote, follow the terminal designations). END_OF_DOCUMENT_TOKEN_TO_BE_REPLACED 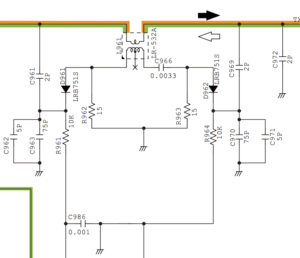 Above is an extract of the IC-7300 circuit in the area of the directional power coupler used for VSWR measurement. The circuit is a quite conventional Bruene coupler, and its response is similar to several types of directional couplers that produce a DC output voltage from a half wave detector. END_OF_DOCUMENT_TOKEN_TO_BE_REPLACED 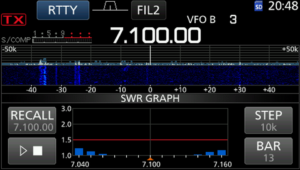 This article expands that set with NEC-4.2 models of some variations on the traditional Franklin form of the antenna.

Let’s start with review of the traditional Franklin form 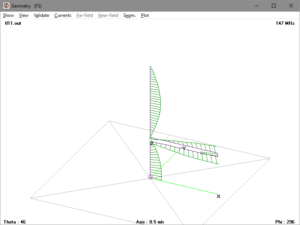 The graphic above shows the topology of the Franklin form. It comprises a half wave vertical element over a quarter wave element, with a quarter wave horizontal s/c stub as the device to encourage co-phased operation of the elements. The current magnitude and phase distribution is shown in green. END_OF_DOCUMENT_TOKEN_TO_BE_REPLACED