This is a report on a series of tests performed on a Hobbyking Multistar 4220-650Kv sensorless brushless DC motor. 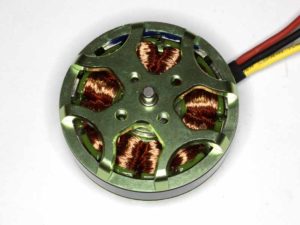 Above, a top view of the bare motor. It is a 12S16P disc form or pancake form motor, a style that is very popular though inclined to sync problems. 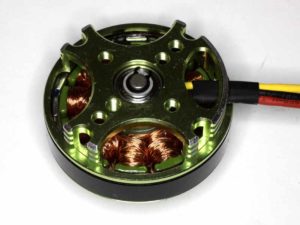 Above, the underneath of the bare motor.

The prop adapter is not shown, it had almost 1mm runout and would need to be replaced to actually fly the motor as propeller induced vibration would be unacceptable.

The motor would appear to be similar to the Hengli 42 20 650Kv, in fact so similar that it would seem possible, even likely that Hengli is the OEM.

The motor was driven at 970rpm and the voltage between two motor wires observed on a scope. 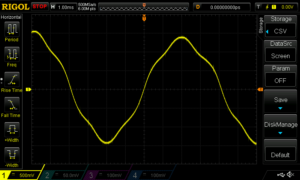 The line-line voltage is the sum of two phase voltages, one of which is a time delayed copy of the other and whilst the resultant is sinusoidal when the components are purely sinusoidal, the transformation is less obvious for complex waves such as shown above.

The phase voltage is of interest as it drives the sense process that provides motor timing crucial to commutation. 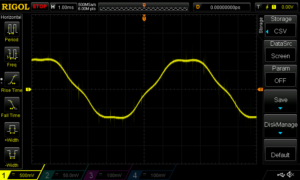 Direct measurement of the phase voltage using a star of 12kΩ resistors to establish a neutral reference yields the waveform above.

On 3S with a 1245SF prop, the motor started ok on a hand servo tester, and with slow throttle increase worked to about 70% throttle then suffered total sync failure and just stopped.

No further testing was performed on BLHeli.

PS: an EEPROM file was hand edited to set demag_compensation to 3 (High), and tested with 4S and 1045SF with a hand tester. It suffered severe sync loss with moderate rate changes in throtle, with care it could be nursed to WOT with very slow throttle increase.

Whilst the motor was positive and smooth on slow throttle changes, it showed signs of sync loss (red LED flashes and audible disruption of speed). Different advance settings were tried (15, 18, 21, 24) but none seemed better than the default (15).

Essentially the script ran three cycles of moderately quick acceleration from about 60% throttle to max and back, and a repeated series with faster acceleration and deceleration. 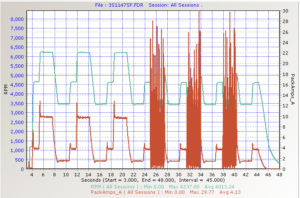 Above, the first cycle of three tests went fairly much as it should, the second cycle with faster acceleration and deceleration encountered severe sync loss on the main acceleration ramp. 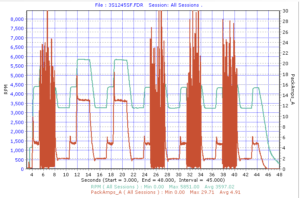 Above, two tests of the first cycle of three tests went fairly much as it should but is clearly marginal as the first test suffered severe sync loss on acceleration. 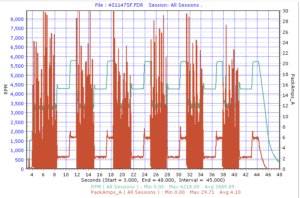 Above, all tests were affected by severe sync loss on the acceleration ramp to WOT. 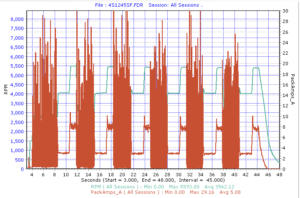 Above, all tests were affected by severe sync loss on the acceleration ramp to WOT.

The motor was tested with a stock Hobbywing XROTOR40A, on 3S with a 1245SF prop and performed faultlessly with a hand servo tester, it was positive and smooth, and no hint of problems with loss of sync on rapid acceleration or deceleration.

The configuration was tested on 4S 1245SF using the ramp scenario above and it failed miserably… it lost sync almost immediately and growled loudly turning slowing in the wrong direction. It was disconnected after just a few seconds. 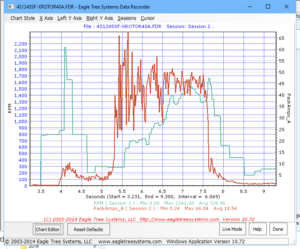 Above the eLogger plot. The motor very quickly lost sync, and current oscillated around 45A, 720W input to a motor that is not delivering any significant shaft power.

A wide range of tests by myself and others with different ESCs, parameter tweaks and code hacks suggests that this motor is not usable with high performance ESCs on 3S with 1147SF or 4S with 1045SF. The fundamental issue is very long demagnetisation times and any work around to retain synchronisation will degrade power.

If you are considering these (or their OEM versions and rebrands), it would be wise to test a sample drive system with particular focus of handling not only full load, but rapid acceleration and decelleration without signs of sync loss.