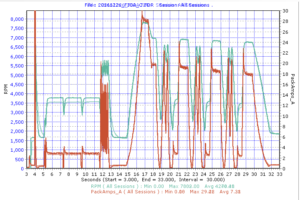 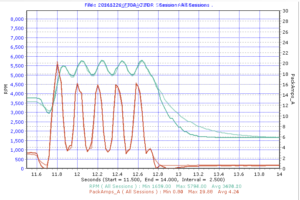 Examining the response carefully, we see that there is negligible difference in the deceleration above 4500rpm (which is hover speed for the aircraft), but COMP_PWM enhanced braking does make an increasingly significant difference at lower rpm which are used in descent.

Flight tests were conducted, but using a single test quadcopter there was considerable time between before and after test flights which adds experimental noise. Nevertheless, a subjective perception was that whilst it was quite easy to get the quad to tumble out of the sky in quick descents low throttle openings without COMP_PWM, tumbling was much less likely at similar throttle openings with COMP_PWM.

Initial flight test comparisons of airmode on Betaflight v3.01 were that without COMP_PWM it was markedly better than with Cleanflight v 1.14.1, and with COMP_PWM it is stable and allows quite rapid controlled descent. More testing required.