Above, the test run of Hobbywing X-Rotor 40A with BLHeli v14.8 firmware. 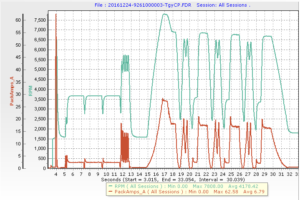 At 17s into the test, there is a brief period of wide open throttle (WOT). BLHeli achieved 7343rpm @ 23.0A whereas SimonK achieved 7784rpm @ 27.4A. We would expect that SimonK delivers 20% more shaft power (the cube of the speed increase) which reconciles with the current squared so efficiencies are pretty much the same… though SimonK achieves 20% higher WOT power and 13% higher thrust. These results were obtained on default settings, there may be higher power and less difference between them if the ESCs were optimised. 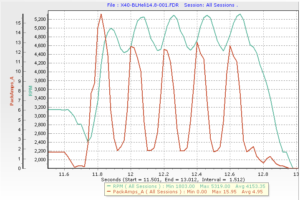 Above zooms in on the rapid test at about 12s into the test for Hobbywing X-Rotor 40A with BLHeli firmware. 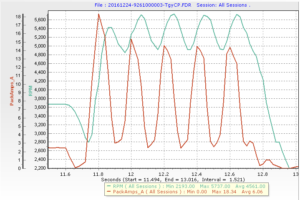 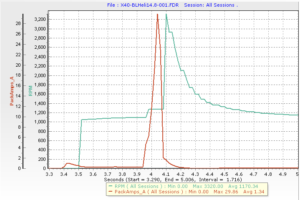 Above is a zoomed in view of the jump test right at the start with Hobbywing X-Rotor 40A with BLHeli firmware. 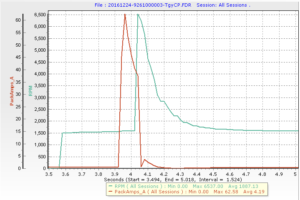 Above is a zoomed in view of the jump test right at the start with Hobbyking 9261000003 40A with SimonK firmware.

SimonK is configured for longer dead time than necessary for the 9261000003 ESC which should deny the full benefit of COMP_PWM on this ESC.

Allowing for the different throttle curves even though both were throttle calibrated to the same scenario, there is not much difference in most of the test.

The most notable difference is the SimonK solution reaches about twice the rpm in the jump test at 4s into the test. BLHeli’s rate limiter kills its response to such a short rapid request.

SimonK achieves 20% higher WOT power but that might not be considered important if WOT is rarely used.

Objectively, there is not a lot of difference between the two configurations for all practical purposes.

Tests were conducted on default configurations of each ESC, with optimisation the results may be different… however most people fly on defaults and so ‘out of the box’ configuration is highly relevant.

The outcome may be different for different scenarios, and in specific applications. The requirements for instance for FPV racing are quite different to say aerial photography.