Above is a X-Rotor 40A modified with a permanent C2 interface cable for programming the MCU. The cable has a JST-SH1.0 connector (purchased as HK 258000026) to plug into the after market Tool Stick clone (HK 289000003). The wires from the left are orange , NC, brown and red. (Orange, Red and Brown wires correspond to Black (GND), White (C2D) and Red (C2CK) dots on BLHeli documentation.) A small dot of hot melt adhesive is applied after soldering the wires to the PCB pads, and the cable folded down into the adhesive (to prevent fatigue and breakage of wires). The whole thing will be served over by clear heat shrink. 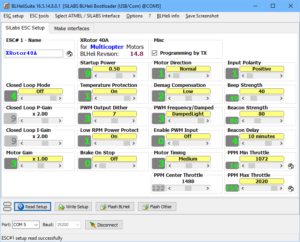 Above is a screenshot of the BLHeli parameter setup read back after 1030/2000 throttle cal, it is the ESC specific defaults modified only by throttle cal. 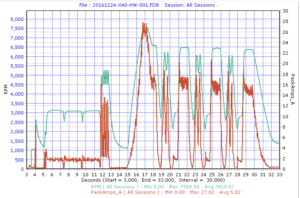 Above, the test run with the stock HW firmware. 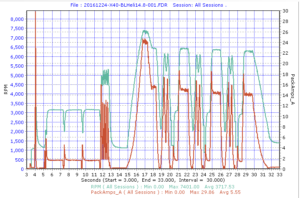 Above, the test run with BLHeli v14.8 firmware. 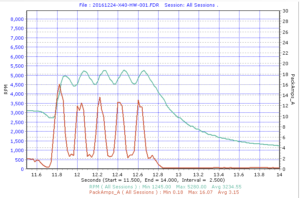 Above zooms in on the rapid test at about 12s into the test for HW firmware. 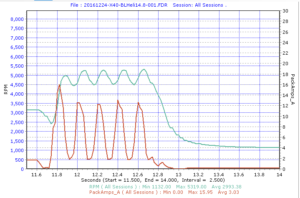 Above zooms in on the rapid test at about 12s into the test for BLHeli firmware. 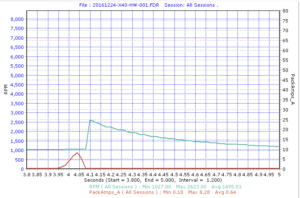 Above is a zoomed in view of the jump test right at the start with HW firmware. 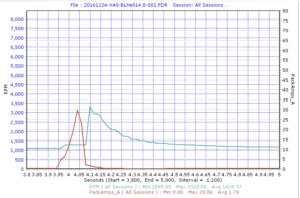 Above is a zoomed in view of the jump test right at the start with BLHeli firmware. BLHeli is configured with complementary PWM which provides improved dynamic braking.

BLHeli is certainly quicker on the jump test, but lest you think it is fast, lets look at SimonK from the tests documented at Report on Hobbyking 40A ESC 4A UBEC 9261000003 / BC3530-14 brushless drive. 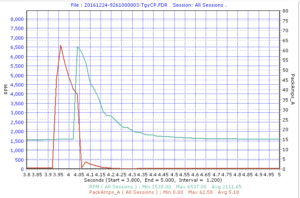 Above is a zoomed in view of the jump test right at the start with SimonK firmware on a Hobbyking 9261000003 40A Atmel based ESC. Chalk and cheese, aren’t they? The SimonK ESC accelerates twice the rpm that BLHeli does, and nearly three times that of the HW firmware.

A simple test was conducted to explore stall recovery based on a suggestion that HW firmware will not restart in the event of a stall.

On the other hand, BLHeli made a stronger attempt to restart, three cycles lasting about 10s in total at which time it abandoned and disarmed. It restarted (or attempted restart) if throttle input was reduced to 1000µs and raised again the min throttle value. That is probably quite sufficient for all practical purposes and limits the damage that might be done though it was observed that ESCs and motors could nevertheless be taxed by this process.

In this static motor test scenario, BLHeli performance is better than the stock HW firmware, but only a little and one might question the value of swapping out the original firmware.

The outcome may be different for different scenarios, and in specific applications. The requirements for instance for FPV racing are quite different to say aerial photography.