I recently purchased a Surecom SW-102 VSWR meter. It looked a little like a supercharged RedDot copy. 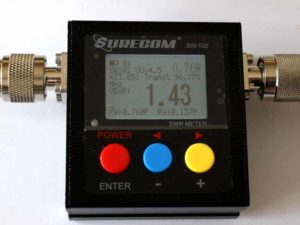 Above the Surecom SW-102 VSWR meter with backlight and photographed under normal interior lighting. The display lacks contrast, and overall is difficult to read due to size of text, fonts used, and lack of contrast. (The pic is taken with a screen protector installed, but the evaluation is based on the bare meter with original protective film removed as it degraded readability.) 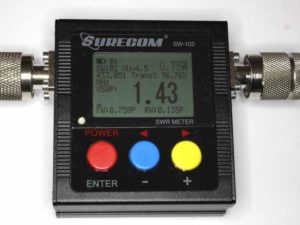 Above, the same meter photographed after the backlight timed out. It is a little easier to read without the backlight in this case. 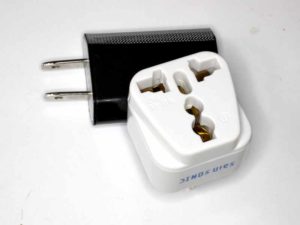 The instrument was supplied with a charger above for the internal LiIon cell. It was supplied to an Australian address with a dangerous adapter to make it compatible with AU power outlets. It is not a satisfactory solution, it is dangerous on several counts and this configuration would never pass regulatory muster here to allow it to be sold legally by a business or an individual. Consigned to the bin!

The supplied power supply is rated at 5V, 1A but the device seems to draw less than 0.5A on charge so a substitute source of power should be easy to find. Nevertheless, the seller cheats buyers by claiming a feature (the power supply) that is manifestly unsafe / incompatible. 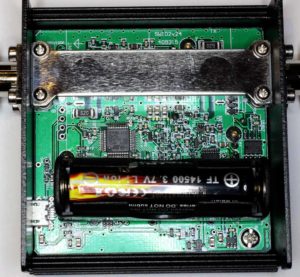 Above, the internals of the SW-102. As you can see it uses a STM8L151 MCU which incorporates 12bit ADC, so it hints the accuracy of the instrument. The coupling line is fundamentally frequency dependent, so either it is compensated in some way or compensation is performed digitally using the measured frequency.

There is not any obvious means of calibrating the nominal impedance of the instrument (though there may be some trimmers under the line section cover though it is questionable whether they can be adjusted effectively without the cover in place).

Some very basic tests were performed to assess the performance of the instrument.

The test scenario was tandem connection of a 2m FM transmitter, Bird 43 directional wattmeter, the SW-102 and a Bird 8150 50Ω load. In this configuration, the Bird will reveal any adverse SW-102 InsertionVswr.

The Bird read 47W forward on a 100W element, and 0W reflected on a 5W element. To all intents and purposes, the InsertionVswer is negligible. 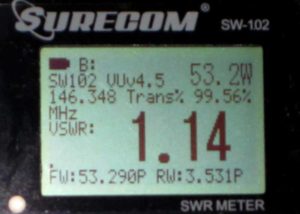 The VSWR is quite a deal higher than indicated by the Bird, significantly so as it suggests reflected power would be 0.228W which would be quite observable on the Bird 5W element where the first scale division is 0.1W.

The RW field is not explained in the documentation, but would appear to mean reflected power is inconsistent with all other displayed data, at 3.531W it is way above the 0.228W implied by VSWR=1.14. 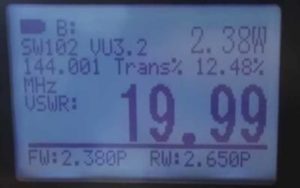 Above is a pic from a promotional video by 409shop.com. Note that RW is significantly greater than FW… that had to be wrong. The instruction sheet supplied contains a pic of a similarly inconsistent scenario.

The Trans% field appears calculated as the inverse of the ReturnLoss implied by the displayed VSWR. It is correctly calculated, but it is a misleading / meaningless quantity as discussed below.

General comments on the display fields

Power indicated in the top right corner of the display with unit W (for watts). It appears to be a truncation of the value labeled FW in the bottom right corner, so it hints that Power is in fact forward power and its accuracy is degraded by truncation rather than rounding. Measurement supports the proposition that Power is forward power (not forward less reflected).

The figure Trans% appears to be efficiency calculated as the inverse of MismatchLoss.

MismatchLoss calculated from VSWR is only valid when the source can be represented as a Thevenin equivalent with Zs=Zo. This is not true of most ham transmitters used at this frequency range and as such the figure plays to a widely held ham misconception.

A more relevant metric would be to display the net power (being simply Pfwd-Prev when the instrument is calibrated for a purely real Zo)… so show Pnet in the top right corner, Pfwd bottom left and correctly calculated Prev bottom right.

RW does not reconcile with any other values displayed using the common metrics applied. It does appear that the ratio FW/RW reconciles with square root of ReturnLoss… ie that a square was not applied in finding reflected power from forward power using VSWR.

One of the essential requirements of an instrument of this type is that both forward and reverse directional couplers should give approximately zero response to a wave travelling in the opposite direction. This is tested by connecting an instrument quality dummy load to the SWR meter and a tx to the opposite side and observing the ratio of voltage from the detectors and reversing the instrument and performing the same test. This directivity figure really should be better than 25dB, preferably better than 30dB over the instrument’s specified operating range.

This SW-102 didn’t make 25dB, so the 62Ω terminating resistance on the REV line was adjusted for better directivity at 146MHz. Directivity @ 146MHz was improved to 34dB, but then directivity @ 440MHz was less than 20dB.

This result is not very surprising, the coupled lines are somewhere around 25° at 440MHz, more than 30° at the highest specified frequency.

I contacted Surecom to get support for the issues raised, and they appear to have passed my enquiry to a retailer who would be unable to resolve the technical issues raised above.

So… if you want an instrument with a crowded, indistinct, hard to read display that contains inconsistent / incorrect / misleading information leaving you guessing about which detail if any is correct… this will impress your ham friends and it comes cheap with none of your purchase cost wasted on product support.

I am sure that many users will be quite satisfied with the instrument, it did not suit me.