Speaker-mics (RSM) are popular with portables (hand-helds), and it turns out that a lot of the implementations which appeared to work properly with conventional FM radios have issues on DMR portables.

The frustration in buying these things online is that sellers typically have no idea of what they are selling.

This article deals with degraded audio in a form that is often described as motor boating.

Differently to common motorboating, the frequency or repetition rate of the interference is constant and that hints its cause.

The DMR radio transmits bursts of data in one of two channel timeslots so it inherently has changing transmitter amplitude (amplitude modulation if you like) and that exposes the system to degradation where the amplitude variation is detected in the microphone circuit. The bursts are for almost 30ms repeated every 60ms, so creating a 16.67Hz square wave in circuits that detect the transmitted RF amplitude. The induced square wave is rich in odd harmonics giving it the distinctive ‘motorboat’ sound.

I dismantled two RSMs that exhibited this problem, and in both cases the ingress was to the electret capsule, and though both mics had some rudimentary RF bypassing of the capsule, it was not sufficient for application with a DMR portable.

The worst of the RSMs I had on hand was (not surprisingly) a Boafeng RSM. A saving feature of the Boafeng RSM was that it used a large ground plane and ingress was mainly to the non-ground parts of the RSM.

A small modification was made to insert an 10µH choke right near the electret capsule to reduce ingress to the capsule itself. 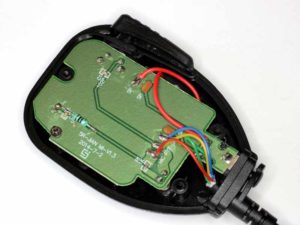 Above is the modification. The track was cut a few mm from the bypass cap, and the gap bridged with the 10µH choke (which is soldered to both the electret and the bypass cap).

This modification almost eliminates the ‘motorboating’.

Further steps one might explore is effective RF grounded of the electret can (which has its challenges as it is usually aluminium). I will obtain some 0603 10µH multilayer chokes to try in some other RSMs.

I dismantled one other RSM, and although ingress was lower than the Boafeng, the board lacked a dominant ground plane and almost everywhere on the board was sensitive to RF ingress. It was deemed not worth pursuing.

Listen to the ‘motorboat’ sound caused by RF ingress from the DMR signal. The induced audio modulates the voice under normal modulation severely degrading audio quality and intelligibility.