This version uses a Polyswitch as the current limiting device. Polyswitches are a resistor which is very low in value until a threshold current is exceeded and the heat increases the resistance greatly. They can be though of as a self resetting fuse, though it takes a moment for them to cool down. Their response time depends on current, they are not as fast as the incandescent lamp used in the Mk I version. 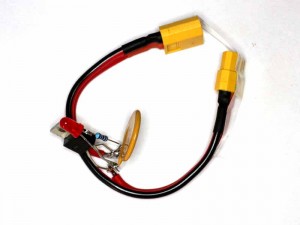 Circuit is essentially the same, a 3A 72V Polyswitch was used as the current limiter, and in shunt with it is a Schottky diode to allow regenerative current to flow from the ESC back into the battery (so cathode towards the battery +) and also in shunt, a 2k2 resistor in series with a red LED to indicate when the Polyswitch has been triggered.

The current rating is sufficient to power a quadcopter FC, Rx, accessories and ESCs, and to allow a low speed test of one motor to be sure that current is safe enough to try directly on a LiPo battery.

I usually use an electronic regulated supply on the bench, but this little device can be taken into the field and flash updates done from a notebook computer and safely tested with the current limiter, the normal Lipo battery and a servo tester.