This is popularly held to be some nirvana, a heavenly state where transmitters are “happy” and all is good. Happiness of transmitters is often given in online discussion by hams as the raison d’être for ATUs .

Lets put all that to the test with a simple but very relevant scenario, lets examine the impedance at the output connector of a T match ATU loaded with Z=50+j50Ω, and adjusted for an input impedance of 50+j0Ω.

This should not be taken to imply that ham transmitters are commonly well represented as a Thevenin source. 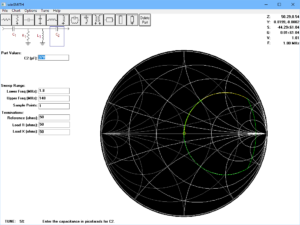 Lets exchange the values of C in the Smith chart model and change to load impedance to 50+j0Ω to model the impedance seen from the output port (where the 50+j50Ω was connected) looking back towards the 50+j0Ω source. 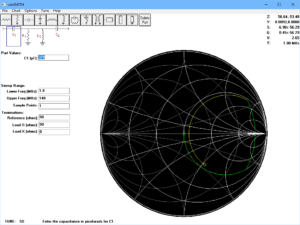 Walt’s proposition is not borne out by solving the network above, and whilst the departure here is not large, it shows that his proposition does not apply to lossy networks in general. The departure is greater for transformation ratios further from unity, and the departure for cascaded elements of a system accumulate.

Since it can be demonstrated that his proposition does not apply to lossy networks, then his all of his statements applying to real world systems (which necessarily contain loss) and that depend on his proposition collapse.

There is not a system wide conjugate match in real world systems, and the benefits that are claimed to follow are not realised.

Why is Walt wrong?

The problem is that Maxwell silently dropped from his statement (1) above the requirement that networks and lines must be lossless, and the example calculated here shows that Maxwell’s proposition does not apply to real world networks that have loss.

Walt Maxwell’s conjugate mirror does not apply in the real world, and the concept is of limited use in understanding real world antenna systems.

When you see people sprouting the Walt’s conjugate mirror you can expect that they have not read widely or thought about the subject much.