Ham lore has it that man made noise on lower HF is radiated predominantly vertically polarised, this is offered and accepted by hams without explanation.

It can be shown by simple observation that the ambient noise level on lower HF is quite different in business or commercial areas, residential areas, and rural areas (ITU-R P.372-12). Not only is there a significant difference, the change happens quite rapidly with distance which suggests there is a dominant component (man made noise) and that the propagation path is a very local one (ground wave).

If you look around a typical residential neighborhood where hams might establish stations, the most obvious conductors that might carry and radiate noise currents from noise generators like appliances, leaky insulators etc are aerial power lines… which are usually closer to horizontal orientation (with horizontal E field) than vertical which seems inconsistent with the common observation that vertically polarised receiving antennas tend to capture more man made noise power than horizontal ones.

This article proposes a mechanism that may explain the apparent inconsistency between noise radiators and noise receivers.

Though this explanation is based on experience, the quantitative analysis here depends on interpretation of Recommendation ITU-R P.368-9 (2/2007) Ground-wave propagation curves for frequencies between 10 kHz and 30 MHz. 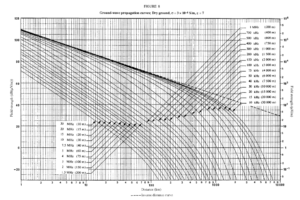 Whilst P.368-9 publishes a set of graphs like the one above for a limited set of grounds, ITU-R also publishes the program (GRWAVE.EXE) which can be used to calculate values for the user’s choice of ground and that is what was used for this article. The graph above is for a vertical monopole over ground with 1000W radiated, the antenna has directivity of 3, and the dashed line (inverse distance curve) is the field strength for a lossless ground (PEC). This can be verified with a spot calculation at 1km. 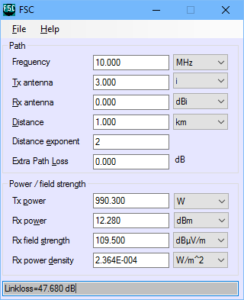 Above, the calculated field strength 109.5dBµV/m reconciles with the graph.

This analysis will use the propagation loss according to P.368-9 (using GRWAVE.EXE) to calculate the contribution of distributed noise sources around the receiving antenna.

Let us assume that vertically polarised waves are radiated from the distributed noise sources and captured at the receiving antenna. 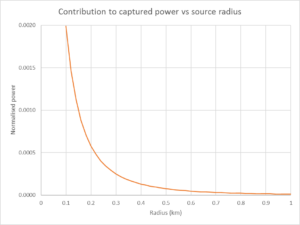 The graph above shows that the contribution of source falls with distance, initially quite rapidly, and this is due to a combination of inverse square law effects and surface wave attenuation due to the ground medium.

We can perform the same analysis for horizontally polarised waves

We obtain a similar result, but attenuation is significantly higher and more so if the dipole heights are reduced. 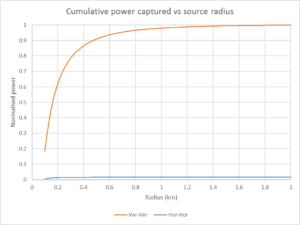