Our iiNet / FTTN NBN 12Mb/s service has been connected for just over a week now, and the first full week of download test results (ISP performance graphs) bears examination. 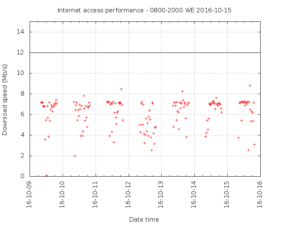 Above is a plot of the measured transfer rate of the test file from iiNet’s site. 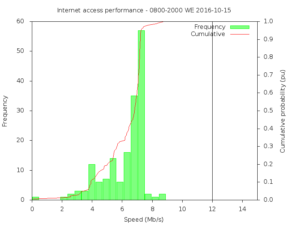 Above is the frequency distribution of the test speeds.

By accounts of early subscribers to NBN FTTN services, the above is far from the poorest performance experienced.

Why is the speed so low given that the ‘pipe’ from the premises to the FTTN node runs as 40Mb/s in our case? (FTTN copper access does NOT run at 100Mb/s unless you are VERY close to the node.)

There are a host of possible reasons, but the most obvious one is that the CVC that iiNet buys from NBN to transport customer data between their point of interconnect (POI) and the subscribers is too small for the connected load and performance suffers.

The CVC is a variable cost element in provision of NBN based service, and one that retail service providers (RSP) choose a capacity cost combination that sets service levels seen by customers on one site and service profitability on the other side. It is if you like the main opportunity for RSP’s the cheat the customer on service in pursuit of profit.

So, don’t be misled into thinking that the 144 RSPs (from NBN’s list a few weeks ago) offer the same performance on say a 25/5Mb/s access since it is determined by NBN’s infrastructure. The RSPs choice of CVC (on NBN infrastructure) is critical to performance.

What is apparent is that the speeds advertised by RSPs and NBN bear little relationship to those experience on a single HTTP transaction (as tested above), and no doubt what gave rise to the Australian Competition and Consumer Commission seeking consultation recently:

We are seeking views about the factors that may prevent accurate broadband speeds information from being provided to consumers and how these factors may be overcome.