I wrote at OCF short vertical dipole for HF that some authors and some sellers wrote descriptions that might entice would be implementors.

George, VY1GP, made a really nice video production of his pitch. 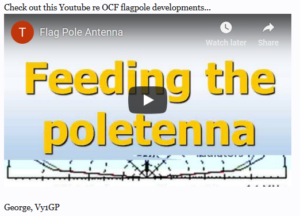 His Youtube video seems to have been substituted with one by Portune, so I have removed the link.

…but do the claims stack up?

George gives a table of efficiencies. 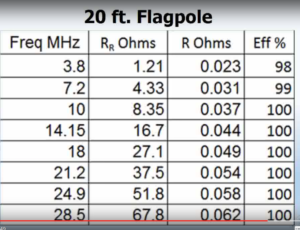 He has calculated these based on a formula for radiation resistance of a short dipole in free space, and the effective RF resistance end to end of the length of tube used for the dipole.

George reported measurements of feed point impedance, but did not report in detail what he measured, in particular whether the normal operating feed line common mode current path was included.

Some latitude must be allowed on prediction here because the antenna is next to a building and the extent of coupling to building structure, wiring, plumbing etc is unknown, as are the soil characteristics. 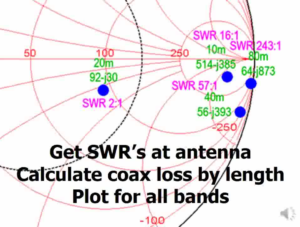 However at 80m, the reported feed point resistance of 84Ω does not reconcile with the 1.2Ω used for the efficiency calculation.

In short, though George has created a nice video production, some of the calculations / models are seriously flawed, and it is hard to reconcile his efficiency calculations with reported input impedance.