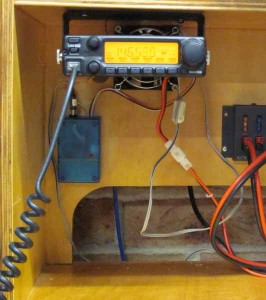 The solution is to fit a fan behind the radio to draw cool air and direct it over the radio, and to fit a thermostat controller so that the fan runs only as needed. 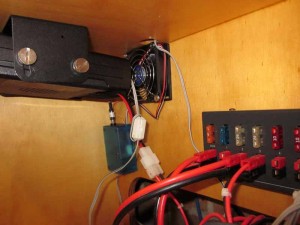 A 12V 0.18A 80mm muffin fan with ceramic bushing was chosen as a relatively quiet fan with good life. 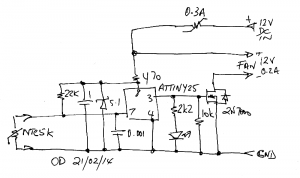 The controller is based on generic heating / cooling controller (Duffy 2012) which uses flexible microcontroller code and application specific calibration constants in EEPROM. In this case, a thermistor is used as the temperature sensing element. An NTC5k thermistor suits the application well, it has low current, low self heating, and gives a resolution of less than 0.1° around 50° in the circuit. (Duffy 2013) explains the behaviour of a thermistor in this role. 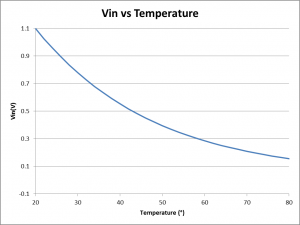 Above is the calculated voltage across the NTC5k thermistor (cost ~$0.40) biased with 22k from +5V. This voltage is converted to a digital value by the microcontroller ADC and compared to the thresholds stored in EEPROM. The thermistor is attached to the radio heat sink with thermal adhesive.

The temperatures chosen for the controller are ON at 50° and OFF at 45° which correspond to voltages of 395mV and 467mV. They are set in EEPROM as ADC counts for ON of 368 and DIFFERENTIAL of 67.

Additionally, a minimum ON time of 60s is set to reduce the chance of short cycling. 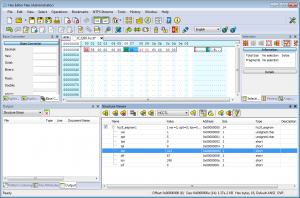 Above is a screen dump from a hex editor showing the EEPROM data structure mapped. Although the application is cooling, the mode is set to heating because of the negative temperature coefficient sensor. 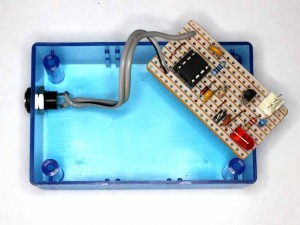 Above is the assembled fan controller. The Veroboard slips into rails in the Jiffy box, the three pin polarised connector takes a standard muffin fan plug, and the two pin header is for the remote thermistor.