The OCF short vertical dipole for HF has become popular, particularly disguised as a flag pole for low impact installations and encouraged by claims of outstanding performance. The antenna was described in QST and a commercial version was available at time of writing.

The rationale for the design is that it is a short dipole, not requiring radials, and feed point offset downwards by 30% as an optimal value for performance (driven by often unsound assessments of coax loss). 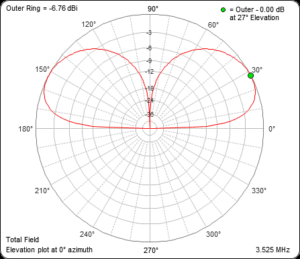 Above is the promising gain plot for one of the commercial implementations, it is only one S point (6dB) behind a quarter wave vertical with 4 buried radials.

Though there are descriptions by hams on how to make these things and how they work, and there are commercial implementations playing to the market and making what seem like pretty extravagant claims, there is a dearth of measurement or even credible models of the antenna system.

The article presents a model of such an antenna at 3.6MHz, a model that illustrates the potential for very low radiation efficiency from the antenna system.

The structure is a variation on Arnold Bailey’s (Bailey 1937) antenna system US Patent 2184729 (often known as a coaxial dipole or sleeve dipole though those terms commonly have other meanings in the ham world).

Above is a diagram of one implementation from Bailey’s patent. In Bailey’s antenna the coax (5) is routed upwards inside tube (8), insulated from and concentric to the lower tube (2); the shield connects to the top of the lower tube (2) and the inner conductor connects to the bottom of the upper conductor (1). (Tube (8) is only required for structural support, it could be insulating, and could be omitted.)

The parallel conducting surfaces comprising the inner surface of the tubular counterpoise and the outer surface of the coaxial outer conductor or sheath constitute a circuit having distributed constants of .such value as to prevent the establishment or production of undesired currents on the sheath outer surface…

Such distributed constants referring to the high impedance λ/4 resonance of the s/c stub formed by those elements.

The difference with the short OCF is that it is less than λ/2 overall, and the feed is offset below the centre (and tube 8 is omitted, a different support is used) all of which results in the s/c stub being just λ/70 in length.

NEC-4.2 is used for the model, and it permits the use of a driven ground electrode to assist in shedding common mode current to ground rather than following the feed line back the shack. Nevertheless further common mode choking of the feed line between transmitter and ATU may be warranted.

This is a hypothetical model, it does not attempt to faithfully duplicate any particular design or product as none are described in sufficient detail to start building a specific model and then the model would need to be calibrated to a built antenna system including its environment and implementation detail.

Nevertheless, it contains important elements that are omitted from most explanations and models of this type of antenna.

The model is highly sensitive to the stated assumptions, so its conclusions might not be applicable to variations on the design… but it does highlight important elements of the context of this antenna SYSTEM.

The impedance of the s/c stub and the common mode choke appear in series between the bottom end of the tube and the ground electrode. Lets calculate their impedances.

The coax shield inside the lower section of tube can be modelled as a 1.2m (λ/70) s/c transmission line stub. Lets assume that the coax is concentric to the tube, ignore the coax jacket, and the conductor diameters are 42mm and 10mm, we can calculate the input impedance of such a stub to be 0.02+j7.8Ω. In practice, it is likely to be lower due to poor concentricity.

The stub impedance is much lower than Bailey’s λ/4 stub, it will make negligible contribution to suppression of feed line common mode current. 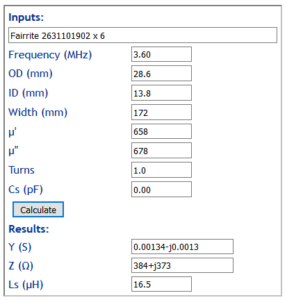 We can calculate the choking impedance of the 6 ferrite sleeves. Z=384+j373Ω. The sleeves chosen were Fairrite’s largest #31 sleeves that fitted over the cable and are a size or two larger than some designs.

The conductor between the bottom end of the tube and the ground electrode is loaded with the sum of the stub impedance and common mode choke impedance, Z=384+j381Ω. Note that the choke dominates this combined impedance. 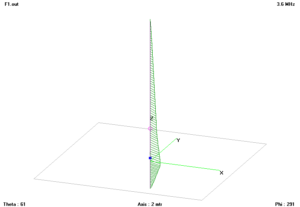 Above is the geometry of the model and plot of current magnitude and phase on the conductors. The current distribution is very important, it questions the explanation that this is a vertical dipole. 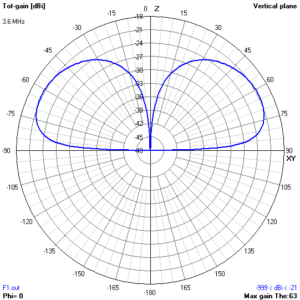 Dissipation in the common mode choke at 100W input to the feed point is 89.6W, a level it is unlikely to sustain for very long.

There is one stand out design challenge with this antenna, and it is fundamental to its operation.

The lower end of the tube is intended to be a point of large charge variation over an RF cycle, yet it is desirable that the coax connection to the ATU carries insignificant common mode current.

The question is whether there is some common mode choke construction that can reduce common mode current sufficiently to fulfil that objective and sustain modest power input to the antenna system.

The real test of this antenna system is to erect one in a clear site (ie away from buildings, vegetation, power lines etc, and measure the field strength from say λ/2 to 2λ. Though it pretends to be a dipole, a lossless implementation (incl perfect ground) will have a gain of 3 (4.77dB) and efficiency could be assessed in quite the same way as antennas for MW broadcast stations by making field strength measurements and factoring out the expected ground loss.