I was browsing a ham forum recently when I came across a Return Loss plot apparently from a ham grade miniVNA Tiny.

Return Loss expressed in dB wrt a real reference impedance will ALWAYS be a positive number in passive networks.

Return Loss according to the miniVNA Tiny 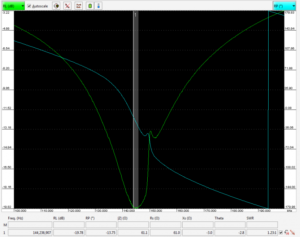 Above, the miniVNA Tiny presents Return Loss as a negative value.

What is plotted and labelled Return Loss is actually the magnitude of S11 or |S11|.

The parameter RP had me guessing… was it equivalent parallel resistance component? It does look like it may be the phase of S11… Return Phase? That’s a new term.

If we take the reported Z at the marker to be 61.0-j3.0, we can calculate various other values. 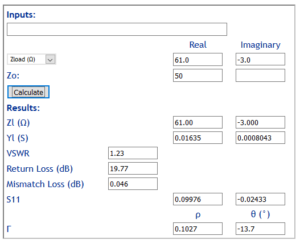 It does look like the miniVNA world is one of an alternate nomenclature and alternate meanings to the mainstream.

Little wonder hams learn bad practice from instruments that should be an example of what is right rather than what is wrong.

PS: the same software plots TL (Transmission Loss?) though a passive device as negative… wrong sign again, probably caused by not understanding S parameters and the fundamental meaning of Loss, then labelling |S21| as TL.