(Gilbert 1996) gave a set of measurements of impedance of several inductors wound as a single layer close spaced solenoid of RG-213 coaxial cable.

Of particular interest is the measurements of the 6t solenoid as there are several measurements well below the self resonant frequency of the inductor.

Key geometry details used in this analysis are: 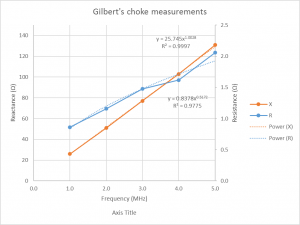 Above is a plot of Gilbert’s measurements from 1 to 5MHz, and curve fits.

Focussing firstly on the X values, the curve fit (y=25.745x^1.0028) is a very good fit and the exponent is almost exactly 1.0 indicating that reactance is almost exactly proportional to frequency and not unduly affected by self resonance (SRF is around 24MHz).

The R plot curve fit (y=0.8378x^0.5172) is a moderately good fit but there is obviously more measurement noise. The exponent is just over 0.5, suggesting that R is approximately proportional to square root of frequency. This is not surprising, we would expect skin effect to result in R of that form.

R of a 2.213m isolated round copper conductor of 8mm diameter at 2MHz can be calculated to be 32.7mΩ.

R of each leg of a 2.213m twin line of round copper conductor of 8mm diameter spaced 10.3mm at 2MHz can be calculated to be 49.6mΩ which includes proximity effect of a conductor on one side. Proximity effect int the solenoid configuration might be a little higher. 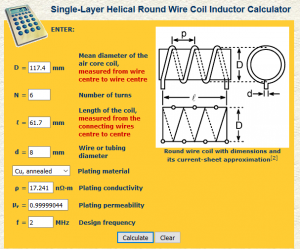 Calculating a solenoid of solid copper of these dimensions using the Hamwaves Inductance Calculator gives an RF resistance of 75.4mΩ which is consistent with the workup above.

Resistance derived from measured Z of 51∠88.7° is 1.16Ω, more than 10 times that accounted for by skin effect and an allowance for proximity effect.

Gilbert’s measurements suggest that his solenoid of coax braid has an RF resistance of much more than expected of a solid copper conductor of the same form taking into account skin effect and proximity effect (for a solid round conductor).