I have used Toshiba alkaline cells in several sizes for many years (decades) and had not encountered one leaked cell… however in the last few months I have found 8 AA cells that have leaked in different devices.

The leakage has always had the same failure. 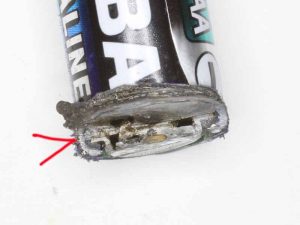 Above is a view of the -ve end of the battery, ground through to expose the inner structure.

The failed batteries have leaked corrosive electrolyte, and they have all split around the circumference of the battery in the region indicated by the red arrow above. The split is common half way or more around the cell, the green seal and remnant of the rolled over case is  there, split away from the main case and covered in corrosive electrolyte residual.

This is not a failure of the green seal material, but rather the case fails.

It fails either due to internal corrosion, os weakness of the forming process. It is not clear that this area should be exposed to electrolyte anyway, so the corrosion might result from some other internal failure that releases electrolyte.

Enough reason to remove them from all devices and NEVER use these cells again.