This article describes a pulse generator for adjustment of SSB RF power amplifiers.

The effect is that finding PA loading conditions for maximum power output on a key down CW signal optimises the loading for conditions that are significantly different to SSB telephony and not only is the maximum power output likely to be lower for key down CW, but it will be lower when used for SSB telephony than if it were adjusted using a drive that created full output power without sagging the power supply more than speech would.

Additionally, RF PAs intended for the amateur market cannot sustain key down CW for very long before overheating and sustaining damage forcing very short adjustment sessions. Adjustment at continuous maximum power puts great demands on a dummy load if one is being used.

So, to solve these problems, there are three objective:

Tests of a few PAs showed that power supply sag was greater than typical voice usage for a burst of full output much over 10ms.

The generator outputs both: 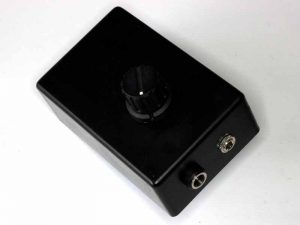 Above, the generator housed in a small Jiffy box with DC input jack, 3.5mm TRS for audio and KEY outputs, and a pot for adjustment of the audio output level. 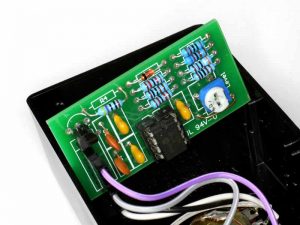 The generator is based on the Roger Beep module, and uses similar code to one of its modes, but on a different chip (PIC12F510). 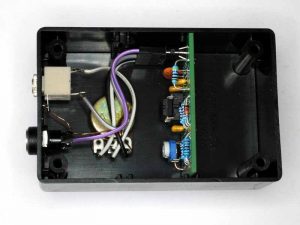 Above is a view of the wiring of the box. 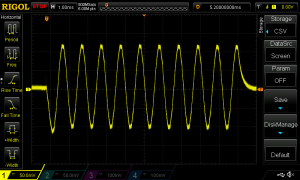 Above is a scope capture of the 1kHz tone burst. The modulation is phase coherent. 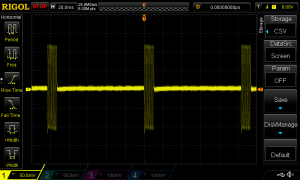 The capture above shows the repetitive tone burst with 10% duty cycle.

The pulse duration and repetition should be sufficient to drive any good PEP wattmeter to correct indication. Note though that the slow response of PEP meters means that the adjustment process is necessarily slow… but the low duty cycle means that a relatively low power dummy load can be used.

As mentioned, the generator also produces ordinary KEY output but a 10ms MARK is equivalent to 110WPM Morse code, and most radios will significantly shape the keying pulse, meaning that the RF output is not as rectangular as the pulse, or the audio burst used in SSB mode.

Do not use audio processing or compression with the audio test waveform, and don’t drive the transceiver to ALC… you are not testing the transmitter handling of ALC transients.

The objective is to find maximum power output with the least drive power. Excessive drive caused by gain compression is a sign of signficant non-linearity.

Of course, having found the settings for maximum power output under the simulated SSB telephony scenario, it is good practice to overcouple the PA to reduce power output by say 5%. This slightly reduces the anode voltage swing reducing the risk of anode cutoff on peaks (and attendent spreading), there is also a very small reduction in the maximum peak anode voltage.