The website Mini Quad Test Bench by Ryan Harrell contains a growing set of test results for motors and ESCs.

In respect of ESCs, it appears to use BLHeli unless the ESC is incompatible in which case the proprietary firmware is used.

The configurations are targeted mainly at the mini quad racer part of the market, and the requirements for different size copters and different applications varies significantly.

The site contains an online editable graph facility that allows customisation of the graph. 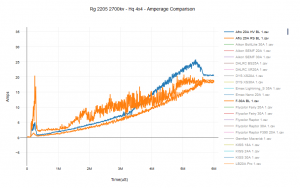 Above is a graph of current vs time for a uniform ramp servo input, and I have disabled most of the ESC types for clarity, selecting just the first two on the list and one which I use (F-30A).

The very different current characteristic quite surprised me given that these are all running BLHeli firmware, and one would have thought that hardware and firmware is now fairly mature. Not so it seems.

I performed my standard ramp test (Arduino RC servo ramp generator) on a F-30A ESC with Turnigy D3530-14 motor (as used on my most recent quad build) with current SimonK and BLHeli. 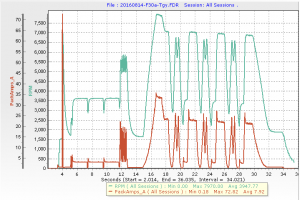 The above capture of SimonK is fairly much as would be expected, response is fast and there are no anomalous current glitches etc. 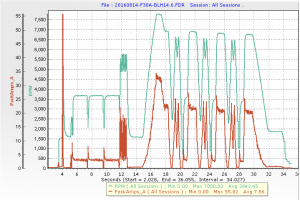 Above is capture of BLHeli 14.6 in the same scenario. Again there is nothing particularly anomalous, but allowing for the different scales, there does appear to be significantly more noise on the current plot and to a lesser extent the rpm plot. It would appear that BLHeli is less stable than SimonK.

Seeing some form of noise on the plots begs further examination. Because the noise on the BLHeli plots was significantly higher, it will be used as it suggests that the noise is not an artifact of instrumentation / measurement or intrinsically due to the ESC hardware, but due mainly to the BLHeli firmware. 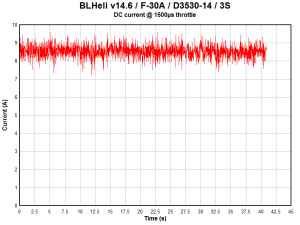 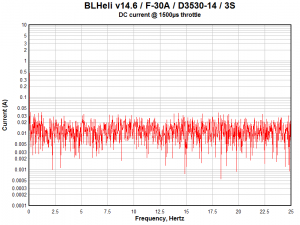 Above is the spectral distribution of the 2048 samples (by FFT). It is not very revealing, there does not appear to be any dominant frequency components, it looks much like random noise (white noise).

This noise is superimposed on the control input to the ESC, and though current causes thrust, the rotational intertia and limited power available limit the bandwidth of that process.

This observation is interesting in the context where lots of discussion and work centres on improving loop response times in flight controllers, finer resolution ESC input signals, higher frequency ESC updates etc without apparent consideration of the substantial noise that can be injected into the control loops by the ESCs.