I was browsing Joe Hallas’ award winning article Antenna analysers – the basics in Aug 2016 QST when I saw some welcome news. 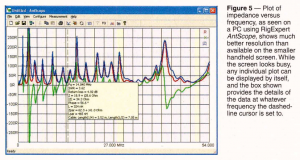 In the notes to this graphic, Joe tells us that you can display any “individual plot” in Antscope. I would dearly like to NOT display the |Z| curve which is apparently there as a concession to the ham audience that doesn’t understand the complex nature of Z and the need to see it in two dimensions. 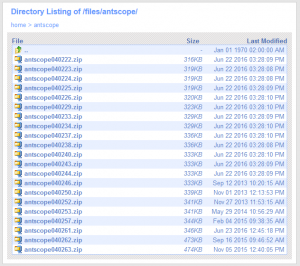 I stopped using the latest version of Antscope on the advice of Rigexpert as they had crippled the graphs of Z after version 4.2.57 preventing the scale being increased beyond 600Ω, so I tried the ‘latest version, 4.2.63 (don’t worry about the dates above, the Rigexpert website is a mess). 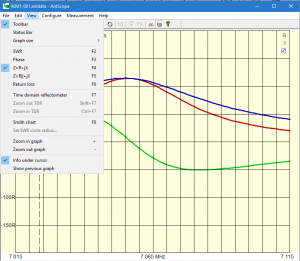 Above is a Z graph displayed, and there is no option to display “individual plots” or R or X or both, you get |Z| with R,X whether you like it or not.

It would be naive to think of the ARRL as either a reliable source of information, or frank and fearless in their review (conflict with advertising revenues). Joe is apparently not as familiar with Antscope as his article might suggest. The award winning article looks more like a cheap page filling promo for Joe’s analyser book (which I wont detail further).

So, sadly Antscope cannot disable the |Z| plot, and the current version cannot display R or X over 600Ω limiting its usefulness, more’s the pity,… though you can export the data and use a third party tool to create more meaningful graphs of high impedance loads, baluns, stubs, chokes, components etc.