I made a measurement of ambient noise on 144MHz this morning using the technique described at (Duffy 2009). 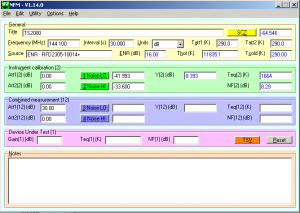 First step is to recheck the NF of the receiver. The TS2000 is getting a little tired, NF=8.3dB. 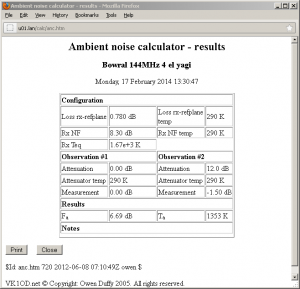 Above, the results of the calculator on the measurement. Ta=1353K (Fa=6.7dB) which is a little higher than I expected given that it is a large block residential area (low density) with underground HV and LV power, negligible traffic even on the nearby ‘main’ road, and antenna pointing towards Canberra over mostly rural land a few hundred metres away.

A second measurement with the antenna pointing at Knight’s Hill, a TV transmitting site about 25km away gave Ta=1900K (Fa=8.2dB).

Neither of these are huge numbers, Ta in excess of 2000K is not uncommon in residential areas of cities, worse in commercial precincts. 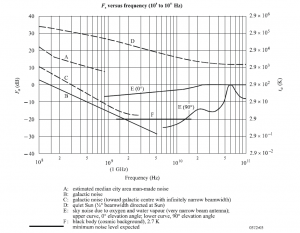 The results obtained are well within range of the predictions of (ITU-R 2009).

Note that Ta will vary with direction, hour of day and from day to day.