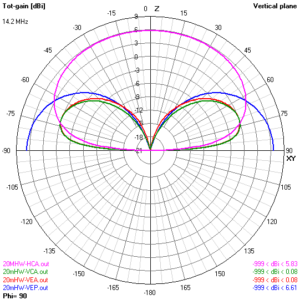 Above are the patterns from the models for discussion.

Lets just remind ourselves that GAIN and EFFICIENCY are related, GAIN=DIRECTIVITY*EFFICIENCY.

Above, the blue curve is the vertical half wave bottom fed over perfect ground. It has a pattern (6dBi omni gain at low elevation) and radiation efficiency (100%) that hams dream of, and no doubt some achieve it in their dreams. The outcome is the result of ignoring the effects of real ground.

The red curve is the vertical half wave bottom fed over real ground. Radiation efficiency is just 25.7%, even though, gain at low elevations is relatively good, gain near the zenith is very low. 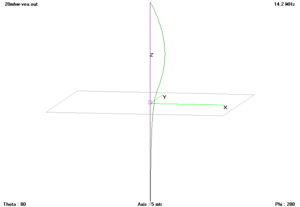 Above is a current magnitude distribution on the conductors. Current flows down into the ground electrode, it is relatively small and diminishes quickly. That current results in conversion of RF energy to heat, though the quantum is rather difficult to assess. The following model is a similar, but avoids that loss element.

The green curve is the vertical half wave centre fed over real ground (elevated 0.2m). Radiation efficiency is just 24.5%, even though, gain at low elevations is relatively good, gain near the zenith is very low.

The characteristics are very similar to the previous model, and the suggestion is that a lot of energy is converted to heat in the soil, but it is mainly due to the effects of E and H fields around the antenna than more immediately around the ground electrode used in the previous model.

The pink curve is the horizontal half wave centre fed over real ground (elevated 5m). Radiation efficiency is just 73%, even though, gain at low elevations is relatively poor, gain near the zenith is very good.

The height of 5m was chosen to be similar to that of the other configurations, but most hams would deploy such a dipole at considerably greater heights where efficiency is better, but more importantly the pattern changes greatly and low elevation gain improves significantly.

Antennas do not create energy (a bit of a radical notion for lots of hams gauging from the way the speak).

For antennas above real ground, gain averaged over the hemisphere must be less than 0dBi, which means that if gain is higher than 0dBi in some directions, it must be less in some others.

Of the two antennas presented above, a low vertical half wave and a low horizontal half wave, there is a large difference in gain distribution:

Though one might initially take fright at the low efficiency of the bottom fed vertical half wave over real ground, it is the gain in the directions that most suit operations that really matter, but that is no reason to squander power in inefficient transmission and impedance matching solutions.