A recapitulation for readers’ convenience.

A quick set of measurements was made on my test inductor pictured above. The AIMuhf had been SOL calibrated at the SMA cable end. 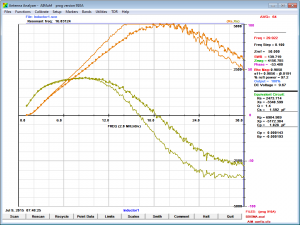 Above is a comparison of a sweep with AIM910A and the previous release, AIM900B (with circles). Quit a difference, which questions how the current measurement compares with other recent versions. 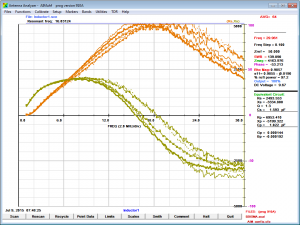 Frustrating validation is that successive measurements have quite a spread. 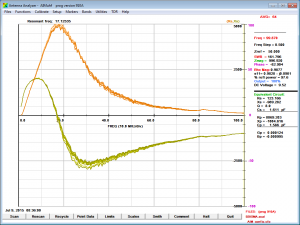 Above is a series of sweeps made successively over about 10 minutes. At some frequencies / R / X combinations, there is quite a deal of spread even though averaging is set to 64. There is a clear drift with successive measurements, as if the instrument heats up and produces different results. This does not really explain the version comparisons above which were all done ‘cold’ due to the observed drift with successive measurements.

Aim910B was almost nine months ago and remains the current version at the time of writing.

I have performed a similar test on AIM910B, “similar” because of a change in the DUT.

To improve accuracy and repeatability, a test fixture was made to allow SOL calibration closer to the inductor and to ‘define’ the inductor with a set of terminals. 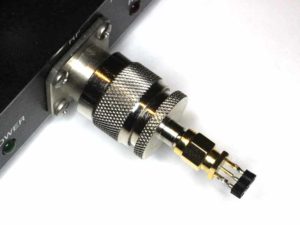 Above is a view of the test fixture, it is a section of machine pin female header strip soldered to an SMA(M) PCB connector. Only the left hand pair of terminals are used. 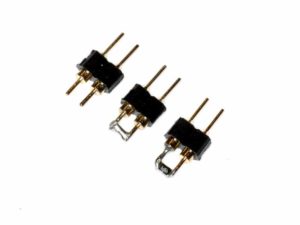 Above is a set of open, short and loads for calibration, all built on sections of male machine pin header strip. The load is a 49.9Ω 1% 1206 resistor.

Above, the test inductor terminated on a set of male pins. 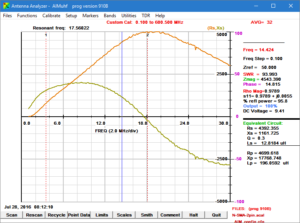 Above is a measurement of the inductor in the new test fixture. The curves are of the same form, but cannot be directly compared due to sensitivity to the small change in the DUT, 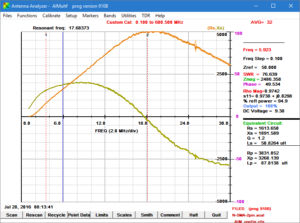 Above is the same scan with five more successive rescans superimposed. There is still evidence of thermal drift, a very slight increase in the resonant frequency.

I have encountered so many issues with the AIMuhf system that I purchased a VNWA3E in the hope of improving confidence in measurements. 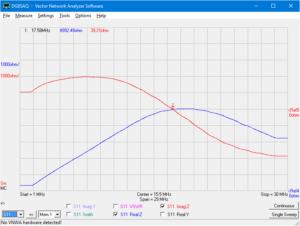 Above is a scan of the same inductor on the VNWA3E.

Though I cannot explain the disparity between the several versions os AIM software in my previous report, measurements of the revised test inductor using AIM910B reconcile well with those using the VNWA3E.