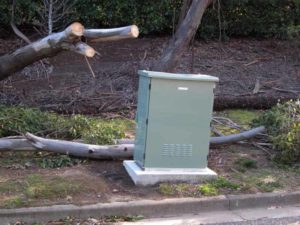 NBN is a wholly government owned ‘enterprise’ operating on a ‘commercial’ basis. Who else could afford to spend capital on infrastructure that delivers no service.

Now people listed many disadvantages of Malcolm’s cheaper NBN, amongst them:

Anyway, as you can see, this cabinet was victim to a falling tree, and not a very big one at that, but big enough! 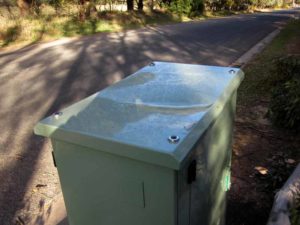 As you can see, the tree fell fairly squarely on the box, though as can be seen in the first pic, it has tipped over a bit… probably the result of inadequate compacting of the excavation fills under the cabinet.

Speaking of inadequate compaction of excavations… 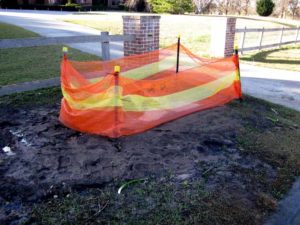 This pit has been attended to several times to rectify the scar on the footpath, and it is barricaded to prevent injury… but clearly the barricade needed to be three times the size.

We await further developments, I should not be surprised if it takes some months to repair the damaged cabinet, permitting eventual fitout with electronics… and who knows, services by Christmas (but which Christmas?).