The matched line loss (MLL) components, Zo and vf characteristics of such a line are estimated using the method described at (Duffy 2011) and have been verified by measurement. 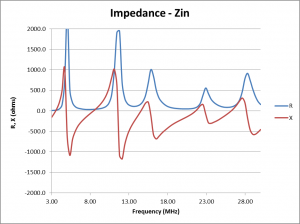 The impedance looking into the transmission line was measured over the range 3.0 to 30MHz using a Rigexpert AA-600, and those measurements along with the estimated MLL components, Zo and vf for the line used to calculate the line loss under the specific conditions of mismatch.

Note that the technique used does not use the popular formula for “additional loss due to SWR”, it is seriously flawed in this scenario (Duffy 2010). 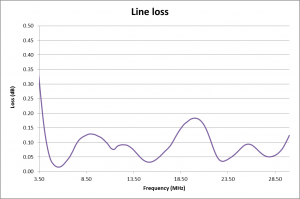 Above is the plot of line loss vs frequency for this specific antenna system.

Line loss is one of the factors often compromised in multi-band antenna systems. In this case, loss of 0.3dB on 80m is reasonable and acceptable, it is as good or better than a lot of stations achieve with a monoband half wave dipole on 80m. On the higher bands it is better.

In the sense that transmitter output power that is not turned into heat somewhere in ATU, balun, feed line, conductor and ground losses is radiated… somewhere, this feed system is quite efficient, especially for a multi-band antenna system.