A recent crash trying to tame the update from CF v1.10 to v1.12 did some damage to two prop adapters, bending them just above the lower flange causing axial runout. The weak point in these adapters is at the transition from the hollow tapered lower section to the solid threaded upper section. 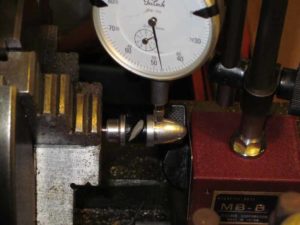 Above is measurement of the runout on the lower part of the spinner with a propeller hub mounted. Total Indicated Runout (TIR) was measured at almost 0.5mm, lets call it 0.5mm, and runout from centre is therefore 0.25mm.

The centre of mass of the whole bent section is probably a little above the middle of the propeller, lets call it mid propeller for round numbers.

Lets calculate the acceleration force caused in that scenario.

The transmission of this force through the frame to other components, and as might be sensed by the Flight Controller’s (FC) accelerometer is rather complex, but we might expect that it is quite likely to be of the same order of magnitude (though efforts are made to isolate the accelerometer from frame vibration).

In my case, two propellers were affected similarly, the peak force due to two motors (which are not synchronised) might well be around twice that of one motor, so perhaps 0.1g total.

That is significant, as residual acceleration at hover without this problem is of the order of 0.1g gravity. Propeller related vibration is easily distinguished by the sinusoidal nature and frequency of the acceleration produced, whereas vibration due to ‘twitching’ of the attitude by the FC is somewhat more random and tends to be lower in frequency.

A test with the copter held in the hand and the motors run at hover speed one by one using the motor control in Cleanflight-Configurator and observing the accelerometer signal graph confirmed the above.