Insertion Loss (3) is not so readily compared to the other two which are measures of input reflection with a matched termination. It often yields some numbers that appear very acceptable, but might be deceptively so. You might see a coaxial relay specified to have ReturnLoss>30dB to 500MHz. You might see a coax antenna switch specified to have InsertionLoss<0.2dB to 100MHz.

In many applications, the device has relatively low Transmission Loss, so InsertionLoss≈MismatchLoss. This is often the case for adapters, coax switches, coax relays below say 500MHz. It is not the case for attenuators, or most filters.

In turn, MismatchLoss is related to VSWR, so for the case where TransmissionLoss is negligible we can convert InsertionLoss to VSWR and vice-versa. 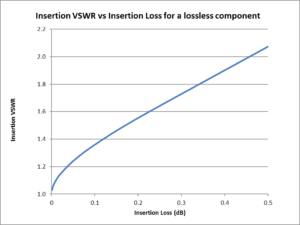 Above is a plot of InsertionVSWR vs InsertionLoss for a lossless device. It can be used to convert one to the other for comparison.

Taking the third example above, a coax antenna switch specified to have InsertionLoss<0.2dB to 100MHz is equivalent to InsertionVSWR<1.6.

Whilst some practitioners might regard InsertionLoss of 0.2dB to be quite acceptable, the InsertionVSWR≈1.55 might be more concerning in terms of the way in which money is allocated to different devices for an overall performance level. 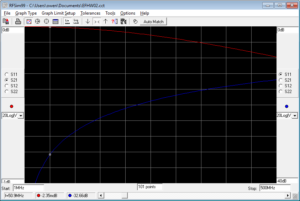 The Zetagi V3 coax switch is advertised to have InsertionLoss=0.2dB at 500MHz (to imply perhaps no worse than 0.2dB below 500MHz).

When sellers use a less common metric to characterise their product, it might just be that they are trying to frustrate apples for apples comparisons with competitor’s products.

The relatively small value of InsertionLoss appeals to the cry for mediocrity in modern ham radio, if it doesn’t cost an S-point, it doesn’t matter.

Footnote: Mismatch Loss though not a particularly complex concept, is not a well understood concept in the ham community. Whilst often misused, it is correctly used above.