I purchased an Acro Seriously Pro F3 flight controller (FC) recently and having soldered the connectors on and loaded the current firmware, it was time for a pre-installation checkout.

The article outlines a basic pre-installation test that revealed problems that would prevent effective use of the FC. 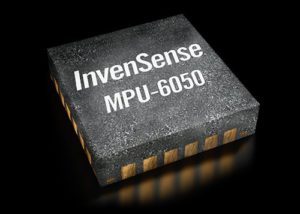 Doing no more than an acc calibration and allowing initialisation with a stabilised FC, the FC on the end of a USB cable should deliver acceptable sensor responses in Cleanflight Configurator (CC).

This flight controller has two problems:

The flight controller was held flat on a stable horizontal surface with a heavy weight and the sensor output observed in CC. 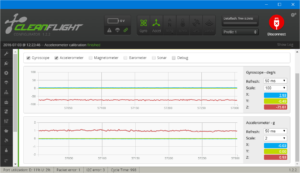 Above is a plot of the sensor output, and it can be seen that the z axis gyro has a offset of around -90°/s yaw. Viewing the main screen in CC, the copter is yawing continuously.

The gyro is supposed to calibrate at startup (while the flight controller is steady). 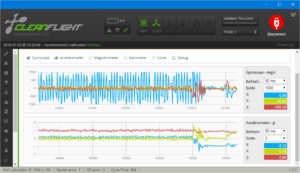 Above is the output of a test where the FC is held flat between two opposite corners, and on corner is wiggled up and down continuously. This should create an equal amplitude signal in the X and Y acc channels, and equal X and Y amplitude in the X and Y gyro channels. It can be seen that although the gyro amplitudes are similar for X and Y (evidence that it is being excited equally), but there is very little Y channel acc output compared to the X channel.

Comparison plots from a good FC. 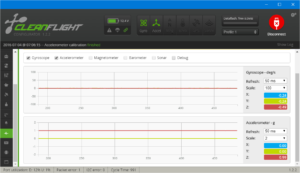 Above is the acc and gyro plot from a copter sitting flat on a stable surface. The traces are zero, except for the Z axis acc which is of course 1.0 (gravity). 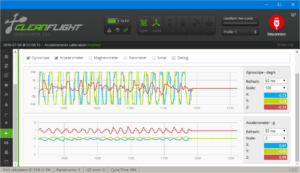 Above is a test with the copter on the flat stable surface and one corner is raised and lowered keeping the other axis approximately horizontal. Observe that the X and Y gyro channels are of similar amplitude, as are the corresponding acc channels. There is of course a little Z axis interaction as it is not being rotated exactly about its centre.